I-65 shut down after wreck 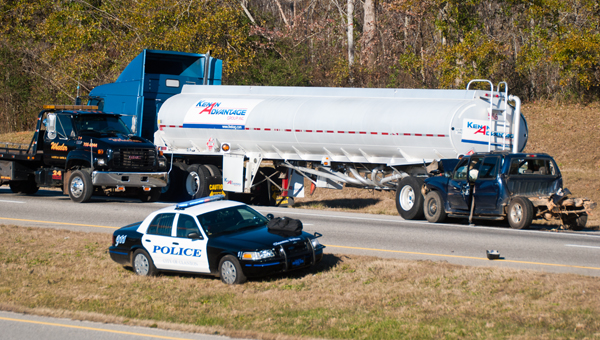 A wreck on Interstate 65 involving two tractor trailers and a pick-up truck resulted in three people being hospitalized and traffic being routed through Clanton.

A wreck on Interstate 65 on Monday resulted in traffic being routed through Clanton.

The driver of a pick-up truck was airlifted to UAB Hospital while a passenger in the vehicle was transported to Chilton Medical Center with injuries that were less serious, Clanton Police Chief Brian Stilwell said.

Names and conditions of those involved in the wreck were unavailable as of Monday evening.

A tractor trailer began having mechanical problems and was pulling off to the side of the Interstate, causing the pick-up to slow down behind it. That’s when a second tractor-trailer rear ended the pick-up, pushing into the back of the first tractor trailer.

“Investigators are trying to determine the actual cause (of the first truck’s mechanical problem),” Stilwell said.

The wreck, which occurred at about 1:30 p.m. near Exit 208, resulted in the closing of the two northbound Interstate lanes.

Traffic was routed off the Interstate at Exit 205 and up to Sixth Street, over to Lay Dam Road and then to Exit 212.

Even local traffic traveling north on 31 was forced to follow the flow onto Sixth Street.

“It’s just easier for us to direct traffic all one way than to ask everyone which way they’re trying to go,” Stilwell said. “Locals know which side street to get back on. It was a mess for a while, but we did the best we could with it.”