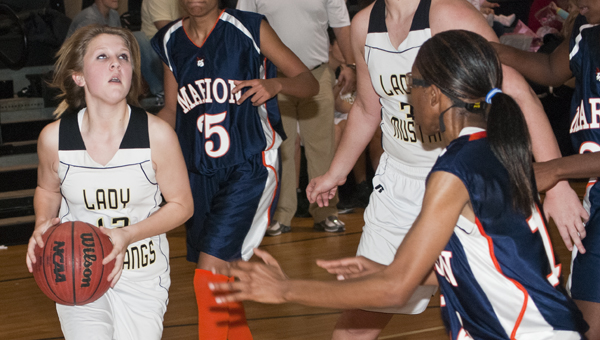 To the hole: Isabella junior Allison Mims, left, drives during a loss to Francis Marion on Tuesday. The Mustangs’ next region game will be Friday against Billingsley.

ISABELLA – Isabella picked a bad time to lose its first game of the season because Tuesday’s contest was against possibly the Mustangs’ toughest basketball region foe, Francis Marion.

The visitors won, 43-28, behind a game-leading 12 points from senior Jasmine Morton.

IHS’s girls team, which played without senior starting point guard Felicia Brasher because of sickness, must regroup before an in-county rivalry game against Maplesville on Thursday and another region showdown, at Billingsley, on Friday.

“They hated to lose, but we’ll bounce back,” IHS coach Jared Day said. “They realized we didn’t play very well and there are some things we need to work on.”

On Tuesday, Isabella trailed, 6-5, at the end of one period but took the lead quickly in the second on a field goal by sophomore Chasity Williams.

Marion’s run was largely the result of forcing Isabella turnovers with a full-court pressure defense, taking advantage of the absence of IHS’s primary ball handler.

The Mustangs are now 3-1 on the season, while Marion improves to 5-2.
Senior Amber Wyatt led Isabella with 11 points, seven of which came in the second half.