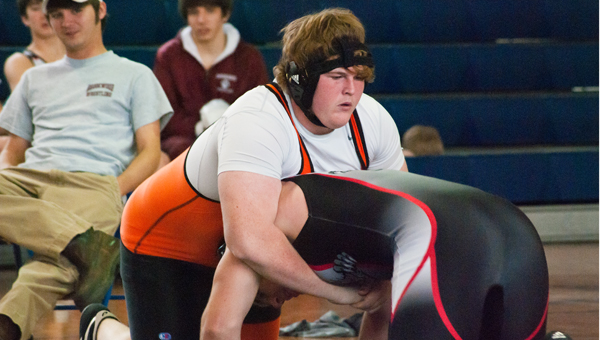 Senior Dylan Jackson ran his record to 5-0 on Saturday as Chilton County’s wrestling team played host for the first time this season.

As a team, the Tigers defeated Shelby County but lost to Brookwood and Holtville in the duals meet.

Jackson, competing in the 189-pound weight class, went 3-0 on the day, with one win coming as the result of a forfeit.

“I was pretty pleased Saturday with our performance,” CCHS coach Kess Cottingham said. “We’re not looking too much at team results—not that that’s not important, but we’ve only got guys in seven out of 12 weight classes.

“I think we’ve shown improvement with all our matches so far.”

Also competing for the Tigers were Tim Canon in the 103-pound weight class, Caleb Smith at 119 pounds, Paul Shearon at 125 pounds and Justin Jackson at 215 pounds.

CCHS will compete at Hueytown on Tuesday, at Oak Mountain on Thursday and at a tournament at Pelham on Friday and Saturday.

“We’re going to get some good mat time this week,” Cottingham said.