Clanton Police Officer Donald Giles was issuing a ticket for an expired tag when he saw a large plastic bag fly out the passenger side window of the stopped car. 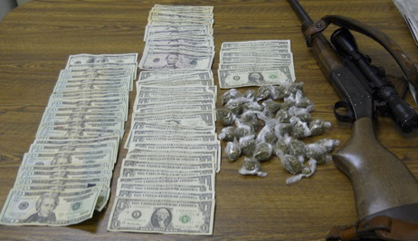 Shown are drugs, money and a rifle seized following a traffic stop Sunday in Clanton.

He then approached the vehicle, seeing the plastic bag contained numerous bags of marijuana. After searching the car, he found more marijuana, $809 in U.S. currency and a hunting rifle.

The three people in the car were arrested and taken to the Chilton County Jail under bonds of $5,000 each. Their identities and other information are not being released at this time because of an ongoing investigation.

Cpt. David Clackley commended Giles for his work and said the department would use the seized money to purchase needed equipment to better serve the city.

Clackley also encouraged anyone with information about drugs in Clanton to call the police department.

“We are trying to take a more proactive approach to law enforcement and follow up on any tips or information we receive from citizens,” Clackley said.

Anyone with drug information can call the Clanton Police Department anonymously at 755-1194 to talk to a detective, leave a message on the narcotics line at 755-1416 or email narcotics@clantonpd.com. Clanton Police Chief Brian Stilwell said messages would remain anonymous.

“We are working toward becoming more proactive, but we always need the public’s help,” Stilwell said.

It’s a popular tradition for local churches to decorate their buildings with poinsettias around Christmastime. Many of these plants come... read more