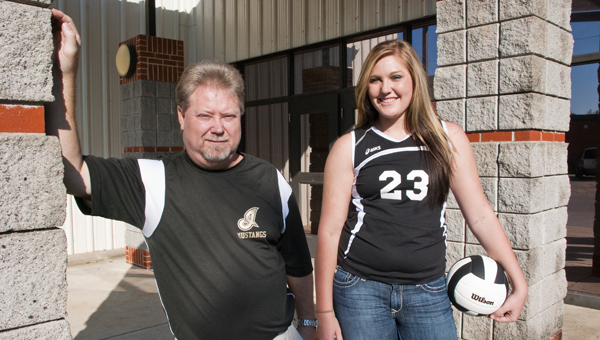 The Isabella volleyball program has known nothing but success since its inception in 1998 under Coach Glen Graham.

The Mustangs have won 13 consecutive area championships and earned eight berths in the state tournament, but 2010 was the year they proved they belonged.

IHS fell to Pleasant Valley, 3-0, in the first round of the Elite 8 tournament in Pelham but had a chance to win each set, tying the score at 15 in the first set, 18 in the second and 22 in the third.

“We had a feeling that we would do better in Pelham,” said Graham, who is The Clanton Advertiser’s Volleyball Coach of the Year. “This team was more confident than in the past. I thought we played hard.”

A better showing at state was a team goal from the get-go. T-shirts were made that proclaimed Isabella, featuring many of the players who were swept out of the 2009 Elite 8, had “Unfinished Business.”

Isabella’s success was due in no small part to the efforts of senior Amber Wyatt, who broke the school single-season records for kills (569) and blocks (152) and was the first IHS player to ever post triple digits in three statistical categories: the two mentioned above along with aces (115).

But it was Wyatt’s leadership contribution that allowed her team to perform better at the highest level—and that has earned Wyatt the Advertiser’s Player of the Year distinction.

“I think we had a lot more chemistry together,” Wyatt said about the 2010 squad. “Last year, we were close, but we weren’t nearly as close. We were like sisters this year. We got to the point where we believed in everybody. We just had the mentality that, ‘This year is going to be different.’”

Wyatt said she considered herself an emotional leader of the team, with the responsibility of keeping her teammates from panicking or getting down.

Wyatt is a five-year varsity player; she picked up a volleyball for the first time during her seventh grade year at Isabella.

“I’ve always been told, ‘You’re tall, you can be good,’” she said. “I think I finally started believing in myself in ninth grade, and then I won MVP of the county tournament my 10th grade year.”

Wyatt stands 6’1” and said she was 5’11” in seventh grade. Her size, talent and success in high school have earned her the opportunity to play college volleyball as an invited walk-on at the University of South Alabama.

“I’m looking forward to it. I’m very excited,” she said. “You go somewhere and you feel at home. I went down there and said, ‘I can see myself here.’”

Graham is proud when former players have the chance to further their volleyball careers, but next season he’ll have to figure out how to keep winning matches without Wyatt, the most decorated player in program history, and six other seniors.

If the past is any indication, don’t doubt Graham will do just that.

Graham, who has been named the area’s top coach three times, said this season’s success should have a carryover effect, and a talented group of players—including starters Khadijah Craig, Savannah Kissel and Allison Mims—returns for another year.

“I need to replace a couple of areas certainly, but I’ve got a core group coming back that think they can compete.”