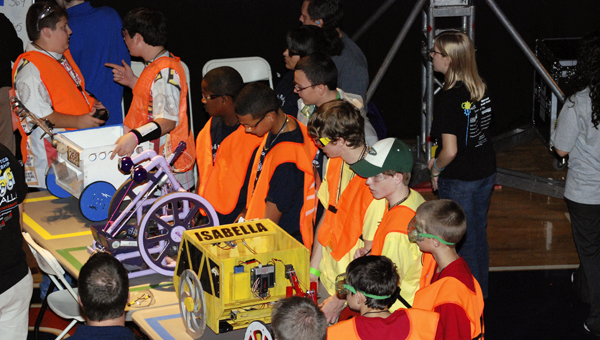 Twenty-three students made the trip to The Plains to participate in the three-day competition, where they were judged on their marketing presentation, engineering, spirit and sportsmanship, as well as their team and exhibits.

“We all had to work together and raise the money to go, and it was a great experience for us,” said junior Kayla Kotke, an engineer for the team. “The biggest part is what you take from it, and we got new ideas and what to improve for next year.”

The Mustangs were the only 2A school to participate in the competition and is the only program in the county with a robotics team.

If there is one thing the team members took from the competition, it was how to work well under pressure.

In between the second and third round — in the heat of competition — the Isabella robot experienced electrical system failure and had to be taken to the “pit.” The students had to combine their knowledge to get the robot up and running for the next round, in which they were successful.

“We had problems with the motor and the right wheel, so the robot was only able to spin in circles,” said freshman Kyle Thrower, robot driver and engineer. “We fixed the problems, but we got stuck toward the back of the competition.”

The competition turned out to be more of a show than the Mustangs expected.

“It was like going to the Super Bowl,” said Thrower. “We came out of a huge disco ball as they called our names.”

Gavin Payton, freshman, could not believe how all-out people go for the competition. Some teams even had cheerleader uniforms and bands, he said.

In addition to the competition, the students also toured Auburn’s Samuel Ginn College of Engineering.

“We wouldn’t have been able to go without the county stepping up and helping us pull this off,” said Jay LeCroy, instructor and team supervisor.

The robot wouldn’t have looked as good without the partnership of Jason Sosa, coach and instructor at the Technical School, and the support of Nelda LeCroy, team co-sponsor and wife of instructor Jay LeCroy, he said.

“There were 1,680 students and 61 teams from 14 states,” said LeCroy. “They went up against teams that had 80 members so they did well, especially going up against some of the biggest schools in the nation.”

Isabella’s robotics team prepares to leave Thursday morning to Auburn for a regional competition. A few weeks from now, the... read more