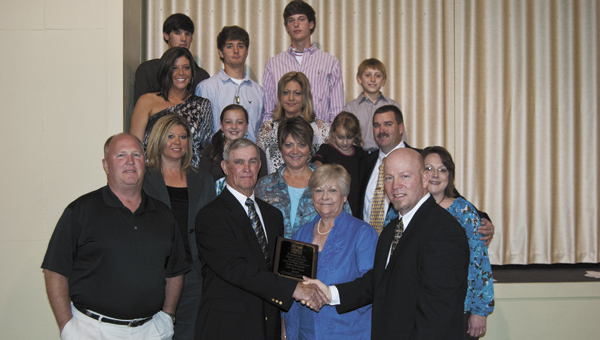 Jerry and Peggy Harrison accept the award for Farm of the Year at Thursday’s Farm-City Week Banquet from Regional Extension Agent Gary Gray. The Harrisons are shown with family members.

Outstanding students throughout Chilton County as well as the Business of the Year and the Farm of the Year were honored Thursday during the annual Farm-City Week Banquet.

The dinner and program were held at Clanton First United Methodist Church’s Helen Parrish Activity Center.
Youth awards were given to members of Future Farmers of America; Family, Career and Community Leaders of America; and 4-H chapters from schools throughout the county.

James Robert Parnell, a student of Autauga Academy, was honored for his work with Chilton County 4-H.

Green opened Jemison Eye Care in 2002, after studying at the University of Montevallo and then the Southern College of Optometry in Memphis. 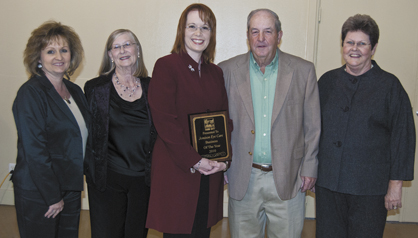 Green said she was honored and thanked her parents, staff and patients.

The Jerry Harrison family earned Farm of the Year.

The Harrisons are famous for their prize-winning peaches, having won the first place ribbon at 20 different Peach Auctions.

Born in Maplesville, Harrison was selling peaches at his family’s stand on U.S. 82 when he was 8 years old — a job he did until he was big enough to drive a tractor at age 12.

He graduated from Maplesville High School, played athletics at Alabama College (now the University of Montevallo) and was drafted in the Army.

He started working at the Horn of Plenty stand in 1962 and still does most of the work around his family’s farm.

Harrison and wife, Peggy, have four children and six grandchildren.

Harrison thanked the Lord for his family and his success as a farmer. He also thanked the Farm-City Week Committee for honoring local farmers each year.

“We are one of the dying breeds — there’s less of them every year,” Harrison said.

For Thanksgiving, Thursday, Nov. 25 and the Friday after, numerous businesses will be closed for the holiday. Listed are the... read more