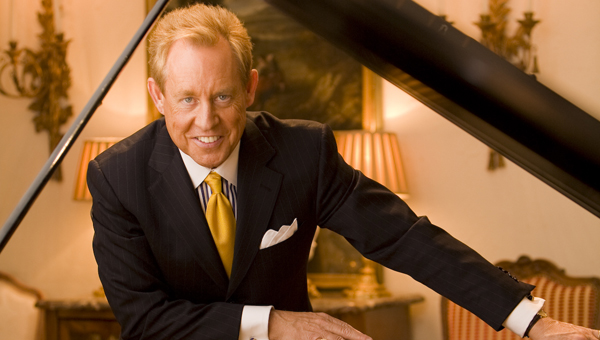 Atcheson chose Frederic Chopin to honor the Polish composer’s 200th birthday, which was earlier this year.

The program began with Polonaise in F-sharp minor, Ballade in G minor, Scherzo in B-flat minor and Polonaise in A-flat major.

After the intermission, he changed both his clothes and his program to gospel selections from his roots in Chilton County.

He began with his heaven medley of “I’ll Fly Away,” “When We All Get To Heaven,” and “When The Roll Is Called Up Yonder.” He then played “Amazing Grace,” which he has played in every Carnegie Hall concert, most often as an encore. He concluded his gospel portion with “Crown Him With Many Crowns.”

The crowd was then entertained as he appeared in his third outfit and played his popular Cole Porter medley of “Let’s Do It,” “Friendship,” “Well, Did You Eva,” “Night and Day” and “Anything Goes.” That was followed by “Try To Remember,” “Autumn Leaves” and “Bad Romance.”

Then he performed his Phantom of the Opera medley of “Think of Me,” “Music of the Night” and “All I Ask of You” followed by “Tea for Two” and “Alexander’s Rag Time Band.”

Atcheson ended his concert with his patriotic medley of “Anchors Aweigh,” “The Caissons Go Rolling Along,” “Marine Hymn,” “Air Force Hymn” and “God Bless America.” He picked up the American flag stand on the edge of the stage and placed it by the piano before he played.

The two-hour concert ended with cheers and standing ovations as he re-entered the stage wearing his fourth outfit of a red velvet jacket with red flame pants to play his encores of “Great Balls of Fire” and his popular Christmas medley.

Throughout the concert, Atcheson spoke to the audience, explaining Chopin’s life and his love for Chopin’s music.

He told personal stories and many about family and his Chilton County upbringing, all with humor that delighted the audience.

After the concert, Atcheson hosted a festive reception at Steinway Hall for several hundred people. The reception was held at the international headquarters of the Steinway Piano Company. All of his 10 receptions have taken place at Steinway Hall. He was made a Steinway artist after his first Carnegie Hall performance in 1991.

Atcheson is still the only student at the famed Juilliard School of Music in New York City to major in two instruments, piano and organ.

He began in 1971 and studied at Juilliard for 10 years getting his bachelor and master’s degrees in both instruments.

While his parents, the Rev. Hymon and Lora Deen Atcheson, were living in Maplesville, Atcheson was born in Selma Baptist Hospital on Oct. 15, 1951.

He attended schools in Clanton from the first grade on through high school graduating in 1970 from Chilton County High School. He studied at Samford University from the age of 12 through his freshman college year.

He has performed on five continents and for three American presidents. He has recorded 16 albums featuring classical music, sacred and popular demonstrating his captivating style.

He and his wife, Laurie, reside in Greenwich, Conn., where he has lived since 1971.