Panthers come up short at Dadeville 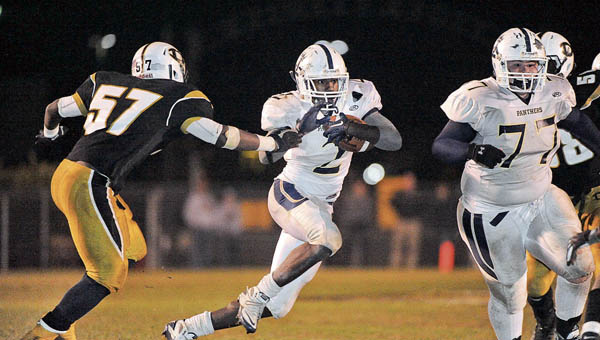 Dadeville received the opening kickoff and took the lead on Quen Pearson’s 1-yard touchdown run. Kyle Caldwell’s kick was good to make it 7-0 less than 4 minutes into the game.

The Tigers retook the lead when Deshawn Redden took the Wildcat snap and ran 14 yards for paydirt.

In the second quarter, Clements rolled out of the pocket and found Swindle sneaking out of the backfield into the secondary. The two connected for a 21-yard passing touchdown to tie the game up once again.

The Panther defense stiffened on the next possession, forcing the Tigers into punt formation. However, Caldwell decided to fake the kick and tried to connect with Kieran Sturdivant. Swindle knocked the pass away, and Jemison took over at midfield.

Shortly after that, Clements hooked up with Edward Hubbard for a 16-yard touchdown strike, but the kick failed, leaving the Jemison with a 20-14 lead.
Dadeville responded and took the lead on Caldwell’s 30-yard touchdown pass to Sturdivant right before the half. The kick put the Tigers up 21-20 at the half.

Jemison took advantage of yet another failed fake punt. A fourth down completion from Clements to Swindle set up Swindle’s 2-yard touchdown run, giving Jemison a 26-21 lead.

Dadeville cut the lead to 26-24 on Caldwell’s 39-yard field goal to end the third quarter.

Then Jemison looked to put away the Tigers when it drove inside the Dadeville 20-yard line, but a holding penalty forced the Panthers into a fourth down play.

Andrew Padgett stepped in front Jemison’s Rodell Chisolm to make an interception to end the drive.

Dadeville’s drive almost began with disaster. Caldwell was about to be sacked near the goal line, but he evaded the defender and found Sturdivant for a 36-yard gain.

Then as the Tigers looked like it might have to try a game-winning field goal, but a horse-collar penalty gave Dadeville one more shot to put it in the end zone.

Pearson took it in from 4 yards out to give Dadeville a 30-26 lead. After a illegal touching penalty on the two-point try, Caldwell scrambled 18 yards, diving for the pylon to give the Tigers a 32-26 lead.

Caldwell, who rarely plays on defense, sealed the game as he intercepted Clements’ final pass.

Caldwell finished the game 16-for-21 for 205 yards and one touchdown while Sturdivant caught five passes for 113 yards. Clint Westbrook had 50 yards on eight carries while Pearson had 49 yards on nine carries.

Jemison was led by Swindle with 115 yards on 25 carries and two receptions for 42 yards. Clements finished 13-for-19 for 239 yards with two interceptions and two touchdowns. Satterfield also had four catches for 69 yards.