New mayor sworn in at Maplesville 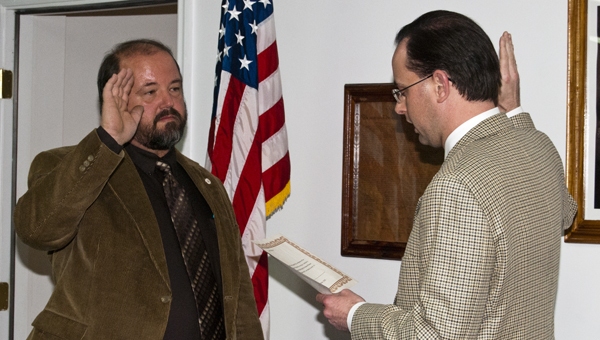 Latham, a longtime councilman, was appointed to finish Kurt Wallace’s term by the council during a special meeting last Thursday. Wallace was elected Nov. 2 as state representative for District 42.

Latham was given the oath of office by town attorney, Hollis Jackson, as the council and family members looked on.

“I think we’re headed in the right direction,” Latham said in his remarks at the end of the meeting. “But like I’ve said before, it’s going to be a team effort.”

Latham’s term will run through the election of November 2012, which will finish the two years Wallace had left in office.

In other business, the council took the following actions:

•Went into an executive session to discuss a pending legal matter.

•Opened bids for a decommissioned 2002 Ford Explorer that is going to be sold. The winning bid was for $2,000.

•Decided to wait until December to fill the vacant council seat caused by Latham’s promotion to mayor. The council said that would give people interested in the position time to apply.

•Agreed to advertise on Dixie 101 for radio ads during Maplesville’s playoff games. The council agreed to buy the $200 ads for up to the next three games.

•Agreed to advertiser in The Clanton Advertiser’s Letters to Santa section for $325.

•Authorized the city to spend up to $200 to create an office for Rep. Wallace in the police station.

Several council members said they thought it would be nice for Wallace to have a hometown office to conduct business in.