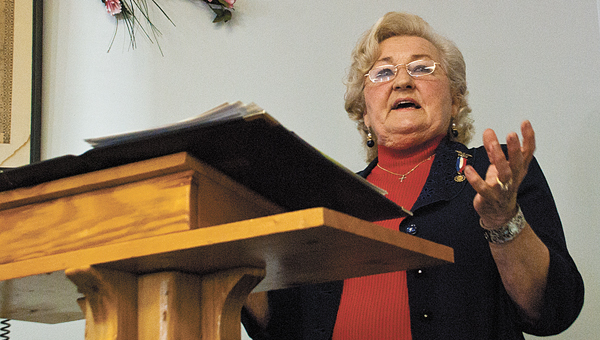 One of the founders of American Village and the eighth person since 1899 to receive the Americanism Award, Eva Newman spoke at the Chilton County Retired Educators Luncheon on Tuesday at Clara’s Country Cafe.

Newman, a Czechoslovakia native—dressed in red white and blue—spoke about her journey and becoming a naturalized citizen.

She opened her speech with examples of the differences between the way Americans and Czechoslovakians interpret different things and Bible verse Deuteronomy 8: 6-10.

Newman spoke about the U.S. government, citizens, liberty and shared her story of the complicated journey her and her family experienced in order to reach America.

“Freedom is not free, you have to work and fight for it,” said Newman. “I took an oath, and I am proud to be a U.S. citizen.”

Newman spoke about the anxiety she experienced when 9/11 occurred and how it brought back those same feelings she experienced being in the small bomb shelter rooms in Czechoslovakia as a child.

“My anxiety was so high I had to go to the doctor,” Newman said.

But after a day of taking the medicine her doctor prescribed, Newman said she flushed the pills down the toilet and knew what she had to do instead.

“I had to get down on my knees and pray – and it worked,” said Newman.

After her speech, Vice President Curtis Smith presented her with a gift of appreciation.

“Well, you know here we’re known for our peaches,” said Smith, as he pulled the jar from the bag. “We just want to say thank you for coming today.”

Honorable veteran: Preston Little served his country in the 9th Army Air Corps. He enlisted in 1941 and was the... read more