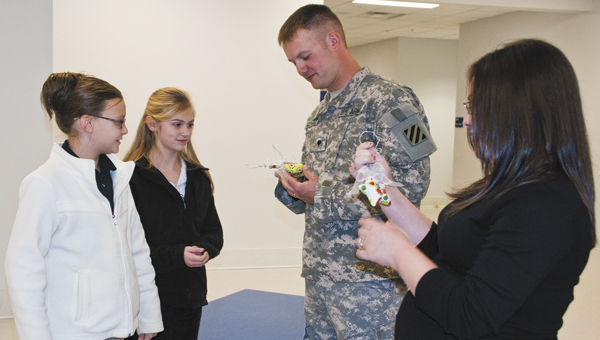 “I was really surprised, and I didn’t expect it,” Akers said Friday.

The three kept in touch after Akers and Forester wrote Billingsley for a church project.

“I received their first letter and a box from Union Grove Baptist Church,” said Billingsley. “After that, we kept writing back and forth. Even after receiving my last letters in Iraq, I had letters waiting for me when I got home.”

At the surprise appearance, Billingsley and his wife Elizabeth received a baby book for their little girl they are expecting, a teddy bear and two Christmas ornaments that the students signed.

“I was nervous and shocked,” said Forester. “In my letters, I told him about how my days went and talked about my rafting trips.”

The students’ wrote Billingsley last at the end of September and the plan for the surprise began Oct. 16, the day after Billingsley returned home.

“I was overwhelmed and I didn’t know what to expect, but I couldn’t stop smiling when I saw them,” said Billingsley. “I’m pretty excited. They were pretty much speechless.”

The students’ parents were also in attendance to see the look on their daughters’ faces.

“I really appreciate you writing them back and thank you for what you do for our country,” said Tara Ellison, mother of Molleigh Akers, to Billingsley. “I’m proud of her for staying committed and for taking the initiative to make a difference in someone’s life.”

“I’m excited for both of them,” said Kim Forester, mother of Cheyenne Forester. “It’s been a blessing for her to communicate with someone that is fighting for our country.”

Getting ready: Isabella coach Scott Booth talks to his team Thursday as it prepares for a playoff game in Cottonwood.... read more