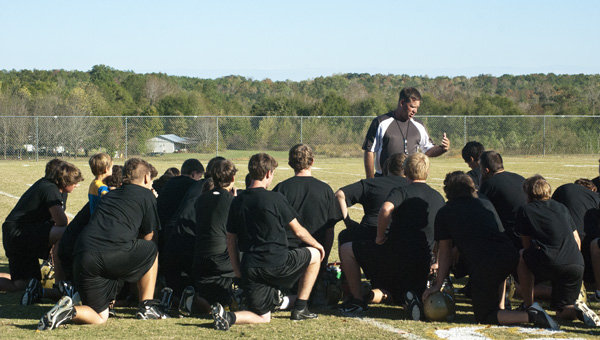 Getting ready: Isabella coach Scott Booth talks to his team Thursday as it prepares for a playoff game in Cottonwood.

ISABELLA – The Isabella football team has a daunting task ahead of it: traveling almost 200 miles to take on second-ranked and unbeaten Cottonwood on Friday in the first round of the state playoffs.

Isabella coach Scott Booth wants to make sure his players know the task isn’t impossible, and what better way than to tell them about an improbable upset he witnessed first-hand—as in on the sidelines.

In 2001, Booth took his first Isabella team to take on undefeated and top-ranked G.W. Long in a first-round playoff game. Those Mustangs left with a 22-15 win.

“Most of these guys were in elementary school when that happened, but at least they know it’s possible—it can happen,” Booth said.

No matter the outcome of Friday’s game, Booth said earning a playoff berth will benefit the program long term.

“It was huge just to be rewarded for the things we were doing,” the coach said. “Now, they can see that what we’re talking about is true…and we get an extra week of practice.”

What the Mustangs (6-4) have been doing is “the little things.”

“When we first started, there would be a few people missing practice,” Booth said. “As the year progressed, everybody was there on time and dressed properly.

“That’s the kind of thing we’re trying to instill in them: It’s the little things that make a difference in the long run.”

They’ve already begun to pay off. As the players have gotten more comfortable with Booth’s unorthodox “Notre Dame Box” offense, the points have started to pile up. IHS averaged 60 points in its last three games of the regular season—all wins.

And the players have grown closer. Following a win over Shades Mountain Christian last week, no one left early to head on home and get some sleep. Instead, every player stayed in the locker room until word came back from the Alabama High School Athletic Association office in Montgomery that the Mustangs were in the playoffs.

Earning a playoff spot might be considered a surprise for a team that lost three of its first four games. Pulling out a win Friday would be a shock.

But, like Booth has been telling his team, it has happened before.

“We like the position we’re in,” he said. “We’re underdogs; nobody thinks we have a chance. So, we can go down there and play with no pressure on us.”

The parallels between Isabella’s trip to Cottonwood and when coach Scott Booth took his first IHS team to G.W. Long are eerie. Still, considering the long trip and the opponent that awaits them, a win will be difficult. Even if Friday marks the end of the Mustangs’ season, though, it will be considered more of a success because they were able to earn a playoff berth, laying a foundation for loftier goals in the future under Booth. One might think the other three local teams in the playoffs would have an easier time because they are hosting a first-round game. But Thorsby’s opponent, Providence Christian, is an experienced playoff team, and Jemison’s opponent, Holtville, comes into the game with a better record than the Panthers. Maplesville might be the county’s only hope for a deep playoff run this season.

It’s already been quite a season for the Thorsby football team—possibly the best season in school history, actually—but the Rebels... read more