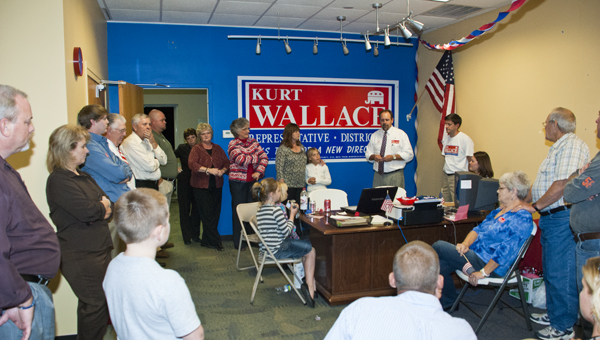 Kurt Wallace speaks to supporters at his campaign headquarters on Tuesday after it became apparent he would be the new state representative for District 42.

“We’re going to go to Montgomery and do some good things,” a teary eyed Wallace told a crowd of about 50 supporters at his campaign headquarters, in a strip mall off Highway 31 near Walmart, after his victory became apparent.

The Shelby County voters included in state House of Representatives District 42 also went for Republican challenger Kurt Wallace on Tuesday, though by a smaller margin than their Chilton County counterparts.

Wallace earned 593 votes in Shelby County to Democrat incumbent Jimmy Martin’s 535, bringing the total number of votes cast in the General Election to 9,369 for Wallace and 5,448 for Martin.

Even a narrow win over one of Chilton County’s most recognized names would’ve surprised Wallace when he began his campaign “just me and no one else,” he said.

But many volunteers jumped on board, and Wallace ended up raising twice as much money as he thought possible, he said.

“I never could have envisioned it,” Wallace said.

Martin said he told his wife, Norma, during campaigning, “I think we’ve got another Goldwater sweep coming through,” referring to the 1964 election in which Alabamians voted a record number of Republicans into office as part of their support for the conservative presidential candidate from Arizona.

Wallace embraced the push for a change, vowing to bring a “new face, new ideas, a new direction,” according to campaign advertisements.

Martin, meanwhile, was unapologetic about his party affiliation, saying local politicians had been lumped together with those in Washington, D.C.

Wallace guaranteed voters he would work hard in his new position.

“I don’t know what I can’t do, never having been down there before, but I’m going down there with the attitude that, my motives are right and so I’ll be successful,” Wallace said.

Arthritis Walk takes to the streets