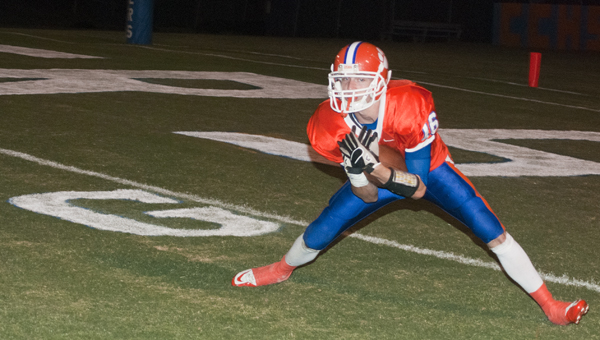 Making the grab: Chilton County senior Dalton Harris hauls in a pass near Shelby County’s goal line during Friday’s game, the last at Tiger Stadium for Harris and his fellow seniors.

The victory was a consolation prize for a team that will not make its fifth consecutive playoff appearance.

Visiting Shelby County turned the ball over on five of its last eight possessions of the game after taking an 8-3 lead on a 1-yard run by junior Brent Wooley and a 2-point conversion by junior Denzell Williams.

CCHS senior Zach Headley began the scoring with a 34-yard field goal about halfway through the first quarter, and then the Tigers (5-5) started taking advantage of miscues by the Wildcats (2-8).

Shelby turned the ball over on downs on its next possession after the score, then lost a fumble, punted, punted, lost another fumble, and lost a final fumble with time winding down in the third period.

Chilton, meanwhile, scored on an 8-yard pass from sophomore quarterback Cameron Cummings to Montel Wilkes with 4 minutes remaining in the second quarter.

A fake after lining up for the point-after attempt failed, but CCHS had the lead for good at 9-8.

Cummings completed eight passes in 16 attempts for 91 yards and two scores—both to Wilkes, who finished with five catches for 53 yards.

Cummings rushed 17 times for 63 yards, but got caught running a little too far near the end of the second quarter as he was called for an illegal forward pass (throwing after crossing the line of scrimmage) on a play that would have resulted in a 10-yard touchdown toss to Chris Felder.

No matter, as Cummings found Wilkes from 15 yards out on the next play.

Headley’s point after made it 16-8 at halftime.

CCHS senior J.J. Agee ran 41 yards to the Shelby 6-yard line on the hosts’ first play from scrimmage of the second half, and Cummings went in untouched on the next play, extending the lead to 23-8 after the extra point.

Senior Joseph Looney got in on the fun with a 1-yard TD run to begin scoring in the fourth quarter. Again, Headley’s point was good.

The Wildcats managed another Wooley touchdown run, this one from 2 yards out, with 8:12 left in the game, and junior Evan McNeal completed a pass to Williams for the 2-point conversion.

But Chilton got a nice return on the ensuing kickoff, and Felder ran 29 yards for the game’s final score on the first play of the possession.

Felder was CCHS’s leading rusher with 124 yards on nine carries.

Sophomore Richard Hilliard led the defense with 14 tackles to go along with a sack and a fumble recovery.

Senior Jacob McKinney contributed 10 stops and also had one sack and one fumble recovery.

ISABELLA – The Isabella Mustangs trampled over the Shades Mountain Eagles on Friday night, 55-13. But the most important result... read more