The Marbury Bulldogs came back in thrilling fashion Friday to defeat a Jemison squad that was without its star player the entire second half. 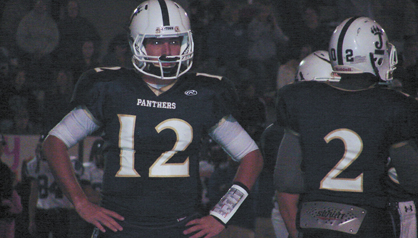 Jemison quarterback Scott Clements looks to the sidelines for a play Friday against Marbury.

Running back Javae Swindle didn’t suit up after halftime. He was banged up on a play midway through the second quarter and sat out five snaps but eventually did return to the game then.

However, he didn’t return after intermission, ensuring he would stay healthy for next week’s playoffs.

Friday’s game with Marbury was for bragging rights more than anything. The out-of-area matchup had no impact on Jemison’s postseason and the first round of playoffs they host in a week.

The Panthers had the better team by far in the first half and scored the night’s first two touchdowns.

Hubbard for sensational Friday and also scored the team’s second TD, a 30-yard pass from Clements to put the Panthers up 14-0.

The game’s outcome might have been decided on Jemison’s next possession. On fourth down, Marbury blocked Jemison’s punt. The ball was recovered by a Bulldog in the end zone to put Marbury on the board, 14-7.

The Panthers responded with a long drive that led to a score via a 1-yard run by Dustin McDaniel, set up by a pass from Clements to Hubbard. The score would remain 20-7 at the break.
Jemison tried an onside kick to start the third quarter; however, Marbury recovered the ball. The Bulldogs capitalized on the good field position and scored off a 1-yard run by Jerry Tyus to tighten things, 20-14.

On their next possession, Marbury’s special teams came through again with a 39-yard field goal by Henry Perez to put the score at 20-17.

The Bulldogs would later take its first lead of the night, 23-20, with a 35-yard pass from Keston Chatman to Tyus.

The Panthers fought back though with a great drive, scoring off a 9-yard pass from Clements to McDaniel.

Despite the tough loss, the Panthers have to regroup quickly to prepare to host a yet-to-be determined team next Friday in the Class 4A playoffs.