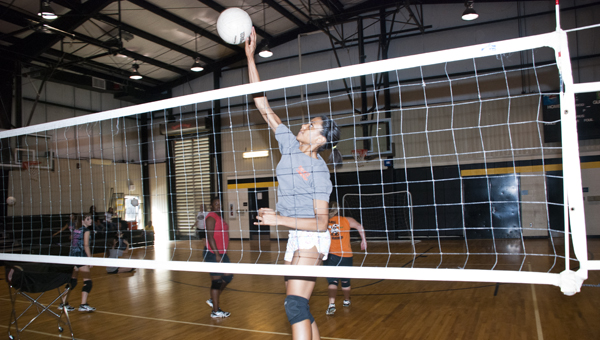 Practice makes perfect: Isabella freshman Alandra Griffith hits a ball over the net on Tuesday during practice. It was the Mustangs’ last practice before Wednesday’s appearance in the Elite 8 state tournament.

Isabella volleyball has a great tradition under coach Glen Graham, so it means something to say this year’s team has a chance to be the best ever at the school.

Put the emphasis on “has a chance.”

According to Graham, where the 2010 Mustangs rank on the all-time list will depend on how they perform at the Elite 8 state tournament on Wednesday, and a showing like last year—when IHS was knocked out in its opening match of the tournament—won’t be enough for this squad to set a new standard.

The Mustangs, who are three away from the school record for wins in a season with 35, against 11 losses, say they learned from last year’s experience and are a better team because of it.

“I feel more comfortable with the whole situation,” said senior Heather Mason, one of three team captains, along with Jessica Maciel and Amber Wyatt. “I think last year we were just happy to be there. Our team is closer now, and we just click better.”

This will be Graham’s eighth team to make the state tournament, and none have finished in the top four teams, as IHS would do with a win in the first round.

As he has the whole season, Graham insists the important thing about the tournament, in which Isabella will first play Pleasant Valley at 3:30 p.m. at the Pelham Civic Complex, is that the Mustangs focus on themselves instead of the opponent—playing their best volleyball despite the circumstances.

“Everybody there is good; you wouldn’t be there if you weren’t good,” Graham said. “We went to two extra tournaments this year so we would see some more teams like Pleasant Valley, getting us ready for this…We shouldn’t be shocked by anything we see.”

If Isabella defeats Pleasant Valley, it would play again, at 8:30 p.m. on Wednesday. The Class 2A tournament finals will be held on Thursday at 4:30 p.m.

Graham said Isabella must execute, staying on the offensive instead of playing on its heels, and an important part of that will be serve receive.

“I really feel like if we receive serves, we’ll have a chance,” he said.

That’s the technical, observable aspect of what the Mustangs must do. They may be able to do it because of how they’ve matured.

“They want to finish this thing,” Graham said.

Commentary: This IHS team could be best ever

Glen Graham has put some impressive teams on the court during his 13 years as Isabella’s volleyball coach. Every one... read more