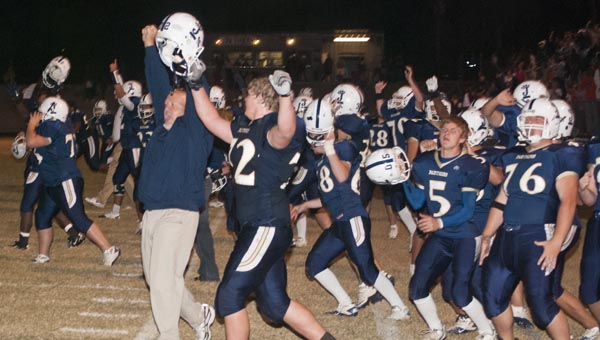 Jemison players and coaches celebrate a win over Greene County on Friday.

JEMISON – Cruz Martinez kicked a 30-yard field goal to send Friday’s game into overtime and then a point after in the second extra period to give Jemison a 57-56 victory and the right to host a first-round playoff game.

The Panthers (6-3, 5-2 Class 4A, Region 4) looked out of it at halftime, falling behind 28-7 because of an inability to stop Greene County’s rushing attack.

Jemison junior Javae Swindle answered a game-opening scoring drive for Greene (6-3, 5-2) by rushing for the first of his six touchdowns, but the visitors scored 21 unanswered points to close the first half.

Another Jemison junior, Eddie Hubbard, ran back the kickoff to begin the second half, and a 94-yard drive featuring nothing but Swindle runs pulled JHS to within one score of the lead, 28-21 with 2:51 remaining in the third quarter.

Swindle scored again less than 2 minutes into the fourth quarter and, after an offsides penalty on Greene County as Jemison was lining up for the extra point, added a 2-point conversion for a 29-28 lead.

Greene County was driving on the ensuing possession, and quarterback Gerald Gaines had gained enough yards for a first down on a third down play and still had his legs churning when, all of a sudden, Jemison’s Markis Lucas emerged from the mass of bodies with the football and a clear path to the end zone.

Greene County took back the lead less than 2 minutes later on a Gaines keeper, but Hubbard answered with another weaving kick return. Swindle punched it in moments later.

The visitors scored what seemed like a game-winning touchdown with 32 seconds on the clock, but JHS senior quarterback Scott Clements guided his team to the 14-yard line with 4 seconds left and Martinez was good for Jemison’s first field goal of the season.

Gaines scored again for Greene County in the first half of the first overtime, but a 2-point conversion attempt failed.

Swindle ran to the left sideline for a score on Jemison’s first play of its possession, but what would have been a game-winning extra point was no good.

Martinez got a chance to redeem himself in the second OT after a replay of Swindle’s TD run in the first overtime.