Robertson back as Chamber director 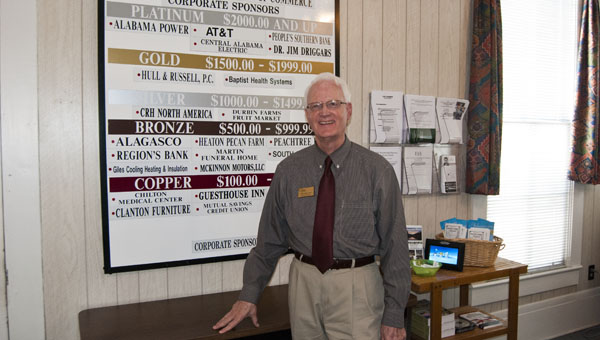 Familiar face: Mike Robertson was director of the Chilton County Chamber of Commerce from 1999 to 2004 and is now back in the role.

A familiar face is back as executive director of the Chilton County Chamber of Commerce.

Mike Robertson, who worked as the Chamber’s director from November 1999 to May 2004, is back in that role. He has been back with the Chamber since late 2009 working in business development.

Robertson moved to Chilton County in 2008 from Cincinnati, Ohio, having worked all over America and Canada. After working more than three decades in sales, he decided to apply for the open Chamber job.

“I saw the ad in the paper, and it intrigued me, “ Robertson said.

Robertson said he enjoyed his time with the Chamber but decided to leave to help his son with his homebuilding business based in Prattville and Millbrook.

He said the experience running a private business has better suited him to lead the Chamber.

“I think I’m a better fit now. I worked 34 years for someone else,” Robertson said. “I learned a lot about what it’s like to run a business for yourself. I think I’m better suited to help businesses because of the experience.”

Robertson said growing the Chamber would be key this next year. Already, the Chamber has welcomed 35 new members this year, compared to 13 last year.

“I feel there is a new excitement about the Chamber,” he said. “This Chamber has great potential. We’re excited about 2011 — it’s going to be a good year.”