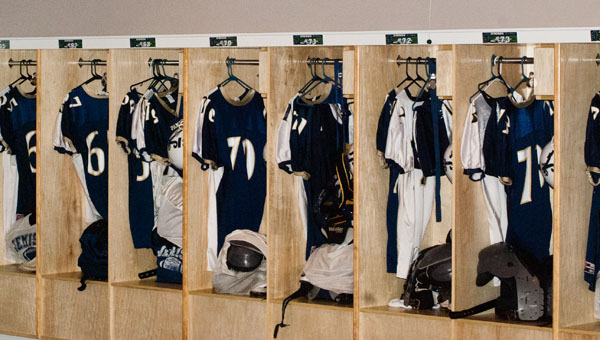 Much goes into a successful football program.

But how about facilities?

Jemison coach Brad Abbott said his team’s renovated field house has helped the Panthers this season and will in the future.

“We have a big meeting room now—before we were using three different areas,” Abbott said. “We were kind of cramped. Now, it’s easier on Friday nights to make adjustments at halftime.”

Where there used to be about 40 lockers stacked one on top of another, there are now more than 60 “pro-style” lockers, which allow the players more space.

Members of the Jemison Quarterback Club completed the project, which was begun during the offseason and spilled over into the start of the season.

The structure was completely renovated, from new coaches’ offices and new restrooms to an expanded locker room with brand new lockers. There’s a new floor and new paint throughout.

Abbott said he worked with the QB Club to design a new layout for the field house, which sits adjacent to Panther Stadium.

Quarterback Club secretary Brad Jackson said improving the field house, which was built in the 1980s, has been a priority since he helped form the club about the year ago.

“Other than some coats of paint, nothing had ever been done to it,” Jackson said about the building. “Everything inside those four walls is brand new now.

“It was a community effort. Nothing we bought, we never paid full value. We either got it donated or got it at cost. I think it’s a facility that our players and our coaches and our community can be proud of.”

All money spent on the project was raised by the club. A steak dinner in May raised more than $10,000.

Then there was the labor. Club members Mark Bolton, Joey Gillespie and Troy Kaylor spent many hours working on the field house, Jackson said.

Abbott said it also encouraged his players to see how much the community cared about their success.

“They were coming up here during the summer working out while all this was going on, so they got to see it from the beginning,” Abbott said. “They saw all the time and effort being put in by the community for them.”

Panther pride: Jemison defensive specialist Morgan Posey, above, leaves her fee to return a serve against Calera on Tuesday while... read more