Panthers one step closer to playoffs 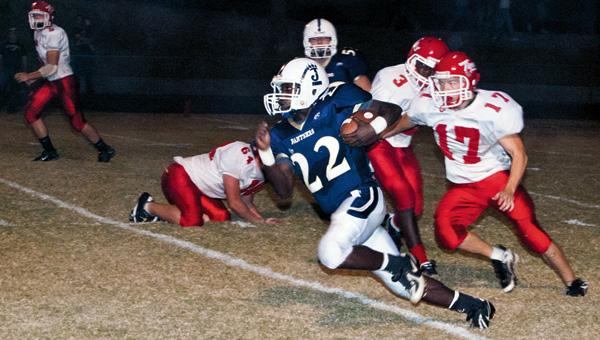 JEMISON – The West Blocton Tigers had managed to claw their way back into a 14-7 game Friday nearing halftime.

But Jemison, led by junior Eddie Hubbard, scored in the last seconds of the opening half and on the kickoff to start the third quarter to put the game out of contention.

Running back Javae Swindle had one of his best games ever in terms of rushing yards and accounted for four touchdowns.

Swindle put Jemison up 14-0 behind two long touchdown runs, the first from 52 yards out and the second from 27 yards out.

West Blocton scored late in the second half to tighten things up, 14-7, but Jemison took over with 90 seconds looking for points. In the game’s biggest play, quarterback Scott Clements found Hubbard on 4th and 10 for a 35-yard touchdown pass with 6 seconds left before the half.

Hubbard continued the heroics after intermission, returning the third quarter kickoff 79 yards for a touchdown.

Clements later found Hubbard again from 7 yards out. Swindle kept gashing the Tiger defense, scoring two more rushing touchdowns in the second half with runs of 57 yards and 13 yards.

Sophomore Kevin King capped scoring for the night, 54-21, with a 24-yard TD run.

CCHS out of playoff contention