CCHS out of playoff contention 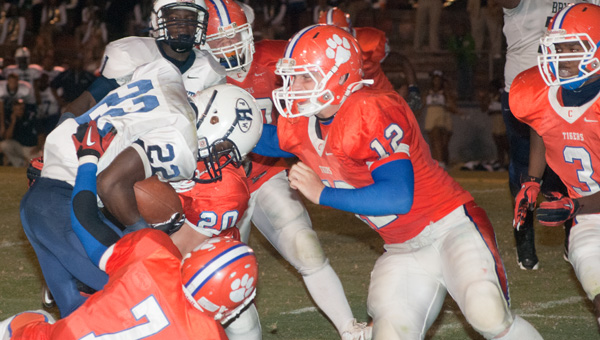 Look it in: Chilton County’s J.J. Agee hauls in a pass from quarterback Cameron Cummings on Friday.

Chilton County saw its playoff hopes slip away Friday with a 9-3 overtime loss to Paul Bryant.

Paul Bryant scored the first touchdown of the game in the extra period. A personal foul with the football on the 1-yard line gave the visiting Stampede (4-3 overall, 3-2 Class 5A, Region 3) a 3rd down with goal to go from the 16-yard line, but quarterback Broderick Hall found fellow senior DeNarrio Singleton for a touchdown.

The point-after attempt was missed, but it wouldn’t matter.

In its turn in overtime, CCHS (2-5, 1-4) was flagged for delay of game before the first snap, lost yardage and a down on an intentional grounding call on second down, took a sack on third down and threw an interception on a desperation pass on 4th-and-goal from the 32-yard line.

Paul Bryant forced OT with a 23-yard field goal by senior kicker Christopher Thompson with 5:05 remaining in the game.

Thompson missed two field goals earlier in the game as the Stampede tried to match CCHS senior Zach Headley’s 22-yard boot with 2:08 on the clock in the first quarter.

The visitors managed only one first down in the first half but moved the football with more regularity in the second half.

Bryant’s first first down came on a 51-yard pass on 3rd-and-31. Hall struck for a pass of 35 yards on 3rd-and-14 in the third quarter, setting up the game-tying field goal.

Maplesville on Friday gave up its first points of the season—and even trailed 13-12 at halftime—but the Red Devils (7-0,... read more