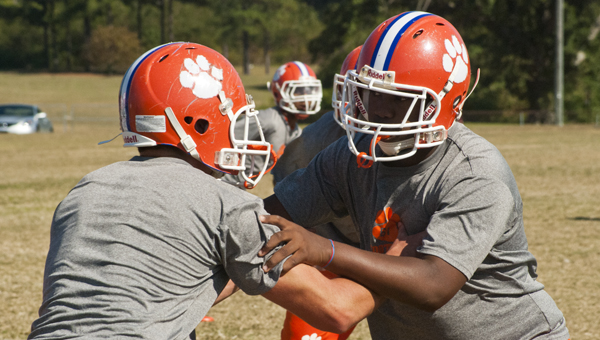 What a relief: Chilton County sophomore Nic Looney, right, is one of several defensive linemen benefitting from two offensive linemen—Delondre DeJarnett and Anthony Neece—helping out on the opposite side of the line of scrimmage.

Even in the midst of a three-game losing streak, Chilton County’s football team is still fighting because there’s plenty left to play for.

And the Tigers (2-4 overall, 1-3 Class 5A, Region 3) are hoping a couple of minor tweaks will make a major difference the rest of the season and maybe even result in a playoff berth.

After a last-minute win over rival Jemison to begin the season, CCHS has lost four out of five games.

“They’ve come to work as usual this week,” coach Brian Carter said. “That’s something they pride themselves in. This season hasn’t gone as we would like, but there hasn’t been any quit.”

Chilton needs to win Friday’s game against Paul Bryant to stay in the hunt for the playoffs. Winning Friday and then the remaining region games, against Wilcox-Central and Central-Tuscaloosa, would guarantee the Tigers a playoff berth.

The top four teams in each region make the playoffs, and Paul Bryant (3-3, 2-2) sits in that fourth spot.

An improved defense could be what propels CCHS into the postseason.

The Tigers didn’t allow a single point in the second half of last week’s loss to Selma, and an important reason was more consistent play by the defensive line.

The two starting offensive guards—junior Delondre DeJarnett and sophomore Anthony Neece, who each weigh more than 270 pounds—have played some defensive tackle, allowing starters Chase Brown, a junior, and Dariel Maul, a senior, to be rested late in games.

The CCHS defenders will want to be as fresh as possible because they will probably spend much of their evening chasing senior Paul Bryant quarterback Broderick Hall.

But the frightening part about Hall is that Carter said he’s just as dangerous passing the football as he is running it.

“He’s one of the best quarterbacks we’ve faced all year,” Carter said. “He basically is the energy to their offense.”

Carter said he plans for his team to play with more offensive energy this week.

The coach said he wants the Tigers to pick up the pace—getting plays called in from the sideline as quickly as possible instead of waiting on the defense to line up and then reacting.

Carter said he thinks the approach will help his team dictate the flow of the game. A playoff berth will depend on it.

Chilton County definitely showed improvement, especially on defense, in last week’s loss to Selma. Coach Brian Carter said his team has continued to work hard despite a tough start to the season. That kind of attitude usually pays off.

Who will win the Paul Bryant-Chilton County football game?

Just when Billingsley seems to be on the right track, along comes a juggernaut to pay a visit. Even if they lose this one, the Bears are still a dangerous team. Pick: American Christian

After its fieldhouse burned down, along with all its equipment, it’s a feel-good story that Hayneville-Central is even able to play this game, which was originally scheduled to be played in Hayneville. Pick: Thorsby

On paper, this would seem to be a contest for second place in Class 4A, Region 4 between two closely matched squads. Look for the reality to be that Jemison is much more skilled. Pick: Jemison

This is probably the most anticipated game of the week, with unbeaten Maplesville possibly facing its first real challenge. Unfortunately for Pickens, this one will end up looking like most other Red Devils wins this season. Pick: Maplesville

If Verbena gets the performances this week it got last week from quarterback Phillip Hensley and running back Kelly Dorsett, the Red Devils could pick up their second win in as many weeks. Pick: Verbena

Isabella will threaten to hand Vincent its first region loss, but the Mustangs will be a couple of offensive playmakers short of pulling off the upset. Pick: Vincent