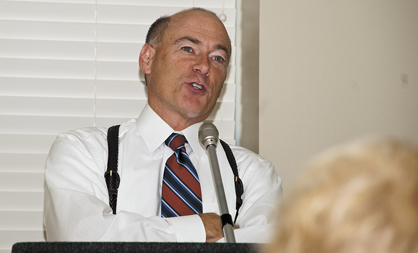 Though he did talk some about weather, he mostly spoke about character and the importance of personal integrity.

He referenced the Monday arrests of several state leaders related to a federal probe of alleged bingo vote buying.

“Integrity… is doing the right thing even when no one is looking,” Spann said.

He also talked about selfishness and how having a servant’s heart will increase personal integrity.

“We’re here to help other people,” said Spann, who challenged those in attendance to find someone they can help in a very real way.

He said that can often be done through something as simple as a prayer or word of encouragement.