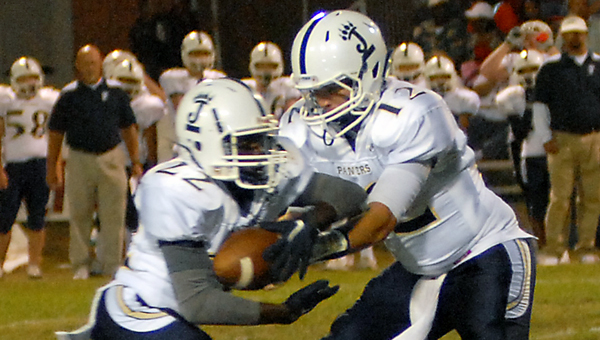 SELMA – After missing the last two games due to injury, Jemison senior quarterback Scott Clements went 6-for-11 for 197 yards and three touchdowns to lead the visiting Panthers to a 42-6 win over winless Southside.

“In the first three games, he’d thrown for something like 615 (yards) and eight touchdowns,” said Jemison head coach Brad Abbott. “We missed him the last two ballgames, but he’s back now and we’re glad to see him have such a good ballgame throwing the ball.”

And it didn’t take Clements long to shake off the rust. The first play from scrimmage, he took a three step drop and tossed a 40-yard touchdown pass to wide receiver Eddie Hubbard.

After a three and out by Southside, Clements struck again with a 28-yard TD pass to Kortlin Zeigler. The scoring drive was aided by a 31-yard run by Javae Swindle, who rushed for 107 yards on 13 carries in the first half.

“We talked about it all week about coming down and getting some success early and not giving them a chance to get going,” Abbott said. “They’ve been in some games lately, and we knew after that game with Keith last week they’d have a lot of confidence coming in.”

Southside’s lone touchdown came after a Jemison score when senior running back Wilbert McConico caught the kickoff on his own 20-yard line, dashed up the middle and then broke left across and down the field for an 80-yard touchdown.

Southside QB Rajadavia Phillips was 17-for-32 on the night for 140 yards with one interception. The Southside Panthers had 65 yards rushing on 28 attempts, with McConico gaining 48-yards on 10 carries. Jemison rushed for 141 yards on 27 attempts.

Clock runs out on CCHS in Selma