Clock runs out on CCHS in Selma 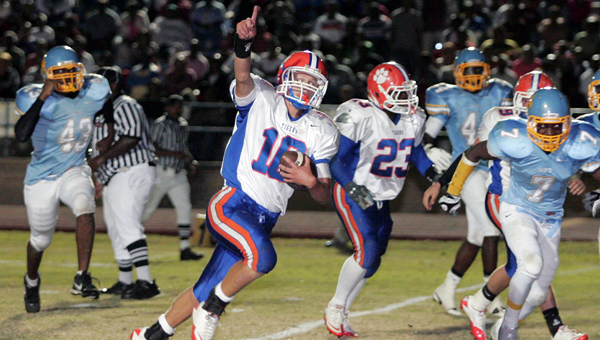 Chilton County quarterback Cameron Cummings celebrates as he runs in for a score. (Photo by Donnie Coffee Jr. / Special)

SELMA — The only loss Selma High School has suffered this season was because of the clock. Now the Saints can credit the clock for a win.

Chilton County mounted its only drive of the game with under 3 minutes to play and scored on the game’s final play, but it wasn’t enough to erase a two-score deficit, and the Tigers lost to Selma, 16-13.

The late touchdown was the only score in the second half for either team and was a product of the Saints’ defense wearing down.

Chilton County struck first with a 13-yard pass after Saints quarterback Darion Alexander threw an interception. The short field allowed the Tigers to take an early lead, but it was short-lived.

Selma added another touchdown right before half on a 10-yard pass from Alexander to Anton Summers to go up 16-7.

Thorsby on Friday suffered its first loss of the season, 49-27 to American Christian. The Rebels came into the game... read more