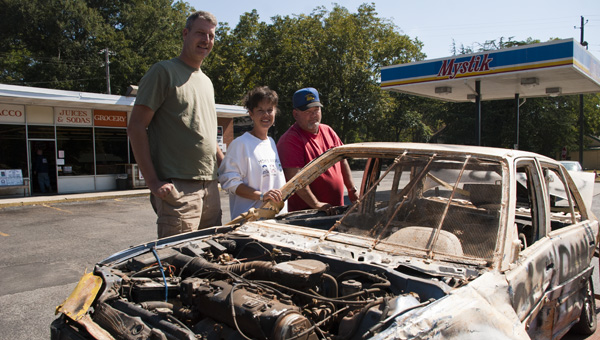 From left, Ron Jewell and Tara Jewell with City Pawn in Thorsby and relative Van Howell were part of a team that produced the winning car in the Chilton County Fair Demolition Derby. The car was driven by David Horton of Columbiana.

David Horton figured the Demolition Derby at the Chilton County Fair would be a good way to put to rest an old car his son, Davey, had driven at some dirt track races.

Horton accomplished his mission on Tuesday, but he also rode the 1987 4-cylinder Honda Civic to a $1,200 Derby win.

“I’m sore all over,” Horton said Wednesday. “A 51-year-old man doesn’t have any business playing a boy’s game.”

Horton said it didn’t help that, during the final round, he was driving the smallest of the eight cars.

“I feel like I gave them just as good as they gave me though,” said Horton, of Columbiana.

Horton said he had never participated in a demolition derby.

He said the Honda’s front-wheel drive could have been an advantage over the rear-wheel drive systems in most of the other cars because “they were spinning out.”

The winning car was parked Wednesday in front of City Pawn, the car’s sponsor.

“It looks like it’s been run over, “ said Tara Jewell of the Thorsby pawn shop. “Everybody said they had a ton of fun.”

Horton said a friend has requested the car’s motor, and the rest of the vehicle will be sold as scrap metal.

The Heat 1 winner was Brian Stand of Montevallo, the Heat 2 winner was Josh Varden of Clanton and the Heat 3 winner was William Lovelady of Maplesville.

After the heats, the top eight cars were put back in the pit for the final round.

There were 14 competitors overall.

When Jemison coach Leighsa Robinson walked into the high school office on Tuesday and took off the wall the plaque... read more