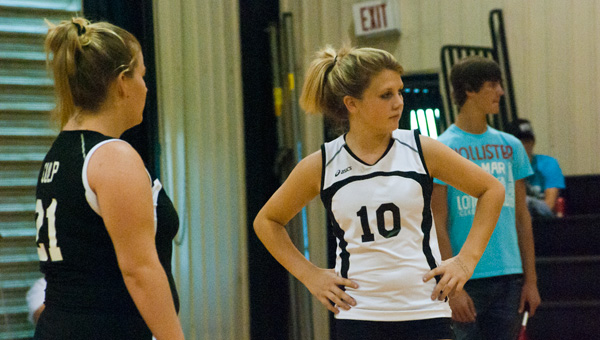 Tough to swallow: Isabella’s Kaylynn Culp, left, and Allison Mims could only look on is disbelief as visiting LAMP on Monday pulled away in the fifth and decisive set.

The eighth-ranked Mustangs (25-9) had beaten LAMP earlier in the season in another nailbiter.

Set 1 saw both teams scrambling for points. Isabella won a nervewracking rally—that saw both teams hit the volleyball off the ceiling but recover to get it back over the net—to make it 22-19.

LAMP’s Molly Stout served for four consecutive points to give her team a 10-7 lead in Set 2, and the visitors wouldn’t give up the edge even though IHS was within striking distance at 22-20.

The hosts scored the first point of the third set in textbook fashion: Jessica Maciel set it up perfectly for Amber Wyatt, who slammed it home.

Isabella held an 11-5 lead and the momentum but allowed LAMP to fight back to take a 13-12 lead after Abby Norris twice tipped the ball over for points and then aced Isabella three times during one trip to the service line.

Wyatt recorded another her game-high 18 kills and then put in an ace to give Isabella a 19-14 lead. The Mustangs almost blew the lead but held on to win the set.

Isabella jumped out to a 5-0 lead in Set 3 but was then outplayed by LAMP.

Wyatt recorded a career-high 11 blocks in the match to go along with five aces and five digs.