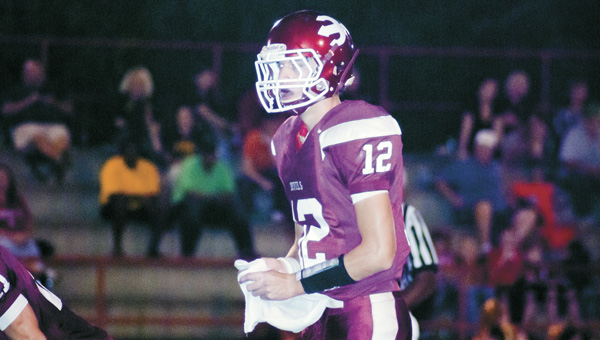 Looking for a score: Maplesville quarterback Matt Hamner gets ready to take a snap during Friday’s win over Billingsley.

Maplesville had little trouble with longtime rival Billingsley on Friday, beating the Bears, 46-0, for their seventh consecutive win in the series.

Maplesville dominated both sides of the ball. Overmatched Billingsley never was able to run the ball and had trouble converting first downs.

Maplesville looked liked one of the top-ranked teams in Class 1A, moving the ball on the ground and through the air. The Red Devils had yet to allow a point midway through the season — that’s 20 quarters and 240 minutes of play.

MHS jumped out to an early lead, behind key playmakers Matt Hamner, Hunter McCay, Cameron Morrow and their offensive line.

Already up 18-0, touchdown runs in the second quarter by Morrow and McCay, as well as a pass from Hamner to McCay put the game out of contention well before the break.

The score at halftime was 39-0. A late game run by senior Bobby Smith capped scoring for the night, 46-0.

Maplesville played mostly second and third string players from the beginning of the third quarter, giving those players valuable experience.

Maplesville (5-0, 3-0 Class 1A, Region 4) hosts regional opponent John Essex next Friday. Billingsley will try to rebound on the road against their regional foe R.C. Hatch.