Mrs. Earley, a native of Chilton County, was an active member of Oak Grove First Baptist Church, where she touched many lives as an Acteens leader.  Twenty-six years ago, she was the recipient of a transplanted kidney donated by her sister, making her one of UAB’s longest-surviving transplant patients. 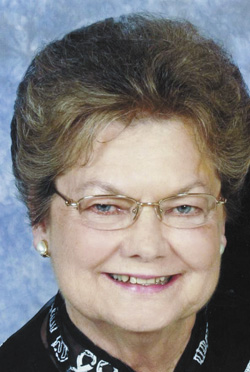 Mrs. Earley was preceded in death by her parents, W.O. Littleton and Mary Ann Avery Littleton.

She is survived by her husband of 53 years, James (Jimmy) Early; a son, Daryl Earley (Sheran) of Childersburg; a daughter, Darlene Andrews (Galen) of Valley; two brothers, Randy Littleton of Childersburg and Roger Littleton of Equality; a sister, Willi Ann Pepper (Charles) of Fresno, Calif.; and two grandchildren, Timothy Hereford II and Kaylyn Andrews, both of Valley.

Visitation will be held at Curtis and Son Funeral Home’s Childersburg Chapel on Tuesday, Sept. 21 from 5-8 p.m.  Funeral service will be held on Wednesday, Sept. 22 at 11 a.m. at the First Baptist Church of Oak Grove with the Rev. Max

Buttram officiating.  Mrs. Earley will lie in state from 10-11 a.m. at the church.  Pallbearers will be: James Lee Bassett, Scott Bassett, Wesley Donahoo, Harry Hughes, Johnny Sims and Michael Maxwell.  The family will accept flowers, or a donation may be made in Mrs. Earley’s memory to the UAB Kidney Foundation.  Condolences may be left at curtisandsonfunerals.com