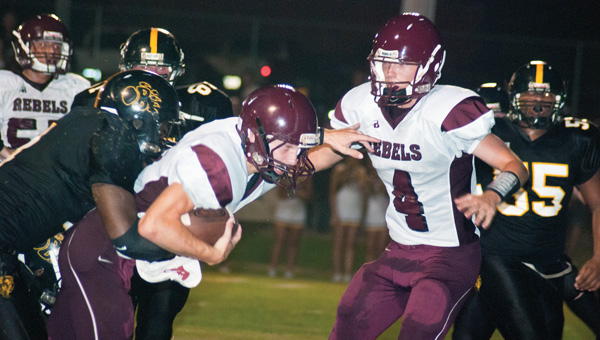 Rushing forward: Thorsby quarterback Andrew Farris scored on a 72-yard touchdown run during Thorsby’s win at Billingsley on Friday. The win improves the Rebels to 4-0 on the season.

BILLINGSLEY – Thorsby edged Billingsley, 42-40, in a game that featured 12 touchdowns, four lead changes, too many turnovers and hundreds of rushing yards that are likely still being tabulated.

In the process, Thorsby improves to 4-0 and beats rival Billingsley for the first time in their last 10 tries, the most recent game being played in 2001.

Billingsley took an early lead with a 10-yard run by A.J. Tyus. A successful 2-point conversion put the Bears up 8-0.

Thorsby answered quickly, though. A 49-yard run by Kalup Nunn set up a 3-yard touchdown dash by quarterback Andrew Farris. The Rebels made their conversion to tie the game 8-8 with 1:02 to go in the first.

The game would go back and forth again, with Billingsley scoring off a 34-yard run by Jimmie Lanier. Nunn struck back quickly with a 4-yard run to give Thorsby its second touchdown of the night.

Billingsley missed its 2-point conversion, so a successful PAT kick gave Thorsby its first lead of the night, 15-14.

The Bears responded with a 9-yard touchdown run by Lanier and went up 22-15 with a successful 2-point conversion.

Farris scored on a 2-yard keeper and then a 1-yard run late in the second quarter.

Farris kept the train going with a 72-yard touchdown run to open the third quarter, giving Thorsby its largest lead of the night, 36-22.

The Bears battled back, though, scoring off a 14-yard pass and then a 1-yard run by Reggie Browder to tighten the score at 36-34.

Thorsby scored again with a pass from Farris to Marcus Bray for 11 yards. A missed PAT kick kept the score to 8 points and the Bears in the game.

Late in the game, Billingsley drove down the field to score off a 13-yard pass from Garrett Price to Keyjuan Goodson with 1:12 to go in the game. The Bears couldn’t convert the 2-point conversion to tie the game, giving Thorsby the 2-point victory.

The Bears missed two prime opportunities, fumbling twice in the second half, one right at the goal line on what would have been a touchdown.

Billingsley (1-3, 1-2 region) next travels to Maplesville, while Thorsby (3-0 region) hopes to improve to 5-0 against Shades Mountain Christian.