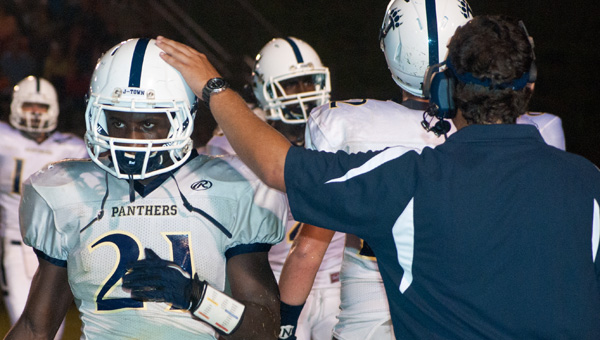 No place like home: Isa Bentley, left, and his Jemison teammates will be one of only two local teams playing at home Friday night. The Panthers will host Class 4A No. 6 Bibb County in a crucial region game.

Isabella (1-2) at American Christian (2-1)
The (second) Scott Booth era at Isabella began with an impressive win, but the Mustangs now find themselves at the end of a difficult three-game stretch—and this contest could be the most difficult of the three.
Pick: American Christian

Thorsby (3-0) at Billingsley (1-2)
Thorsby is off to its best start since the 1980s while Billingsley is trying to find its way under new coach Joe Nettles. This could be the perfect spot for a Bears upset.
Pick: Billingsley

Chilton Co. (2-1) at Greenville (2-1)
Greenville scores a lot (the Tigers are averaging almost 40 points a game against some good competition), and it’s hard to imagine Chilton County, with an unsettled quarterback situation, being able to keep up.
Pick: Greenville

No. 6 Bibb Co. (3-0) at Jemison (2-1)
Before the season, this Jemison team gave off the impression that is was ready to do something special. A win over a top-10 Bibb County squad would certainly qualify.
Pick: Jemison

Verbena (0-3) at Loachapoka (2-1)
Verbena can’t seem to catch a break. The Red Devils are off to their first 0-3 start since 2003, and this week they draw a state playoff semifinalist from a year ago.
Pick: Loachapoka