Citizens remember and reflect on 9/11 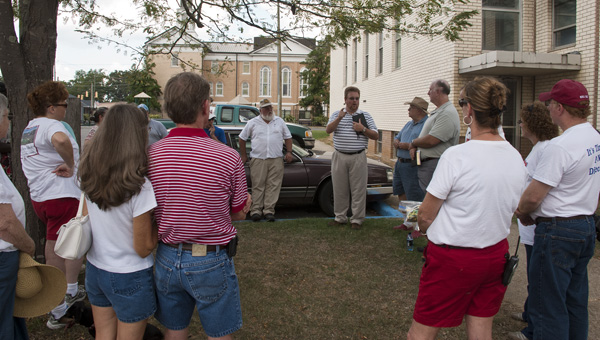 Citizens gather to pray outside the Chilton County Courthouse on Saturday at noon.

Chilton County citizens remembered and reflected on the lasting impact of 9/11 during two separate programs Saturday in Clanton and Jemison.

The Chilton County Tea Party helped sponsor a rally in Jemison City Park. Many conservative leaders spoke about 9/11, patriotism and the American spirit.

During his welcome, Jemison Mayor Eddie Reed said “one terrorist act will never deter us from being the great nation we are.”

“All of us remember where we were that day,” Bentley said.

Bentley told the crowd that people in the world hate America because of the freedoms citizens enjoy.

He said soldiers “fight every day to protect that freedom,” but that many of the victims of 9/11 had no idea that war would be declared on them that day.

“Today we honor people who didn’t know they would be in the fight for freedom,” Bentley said. 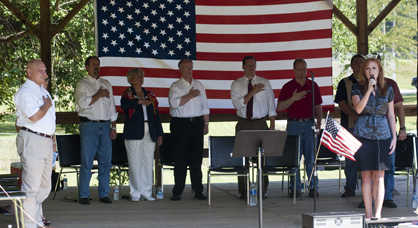 Kurt Wallace said the day wasn’t about politics and “that which binds us as a people is far more important that what separates us.”

While the rally in Jemison was still going on, a prayer meeting was held down U.S. 31 in Clanton at noon.

About 25 people gathered outside the Chilton County Courthouse for prayer and meditation. The assembly was part of an initiative called Cry Out America.

Phil Burnette of the United States Corps of Chaplains (USCOC) helped organize the event and said Americans experienced a vulnerability on 9/11 that the country has never known before.

He also talked about how the country saw a rise in church attendance and volunteerism following the attacks and how there remains a deep spiritual need in America today.

“God is at work and I believe an awakening is underway,” Burnette said. “It’s time for true repentance and sincere prayer.”