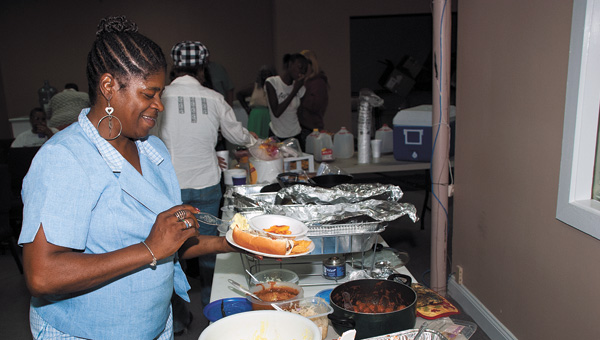 Full plate: Trudy Lee enjoys dinner at Through the Grace of God Ministries on Sept. 9. The weekly services also include Christian messages and gospel singings.

While the focus remains local, Clanton-based Through the Grace of God Ministries has gone international.

The Christian-based, non-profit Ministries recently helped the Rev. C. Howard Nevett take a missionary trip to Africa, and Nevett, a professor of Ministries founder Ralph Bingham at Birmingham Bible College, has given back by speaking at Ministries services.

Nevett’s work is just one of the many activities ongoing at Ministries, located off 8th Street.
Every Thursday and Friday, food is provided for those in need (“Rich or poor,” Bingham says) from 5-6 p.m. A message follows on Thursdays, and a gospel singing follows on Fridays.

More than 50 people were present on Sept. 9 for a typical Thursday service, and Bingham said there have been more than 100 at a time.

Twice a month on Thursdays, clothes are stacked up to be taken home by those that need them.

A non-denominational worship service is held at 9 a.m. each Sunday.

Bingham said he expects to start a counseling program, covering everything from addictions to marriage counseling, in the next few weeks.

A traditional project undertaken by the organization has included going door-to-door and giving away loaves of bread. Bingham said Ministries typically gives out 500 loaves per week.

Bingham said the organization is always in need of donations of time, clothes and non-perishable food items.

“We’re just out here trying to help folks that are really struggling,” Bingham said.
People are struggling in Clanton just as they are in other parts of the world, the reason for Nevett’s trip.

Nevett flew to Tanzania, where–with the help of Nkumbu Mwalyago, a former student who also served as a Swahili interpreter–Nevett ministered to thousands of people.

Nevett said he traveled almost 2,000 miles in the country and just over the border into Zambia—on foot, buses and four-wheeled vehicles. He said he gave 37 lectures and seminars in 25 days.

Nevett said the work is worthwhile knowing that the people he reached will pass along what they learned to friends and relatives.

“It’s an untold number that they’ll be able to reach,” he said.

Bingham hopes the same is true of his Clanton Ministries.

He is spreading the word by speaking to churches and civic clubs, such as the Kiwanis Club, Lions Club and Rotary Club of Chilton County. The organization will also have a booth set up at the Chilton County Fair, from Sept. 27 through Oct. 2.

Long term goals include the construction of a recreation center adjacent to the Ministries building. One day, on the other side of the building, Bingham hopes to be able to open a shelter.

“When we first started having a gospel singing on Saturday night, we couldn’t fill up two rows of chairs,” Bingham said. “One person tells the next, and it’s just gradually grown.

“We’ve got a ways to go; there’s a lot of people out there in the county really struggling right now.”

Those interested in getting involved with Through the Grace of God Ministries should call 755-8199 and leave a message if there is no answer.