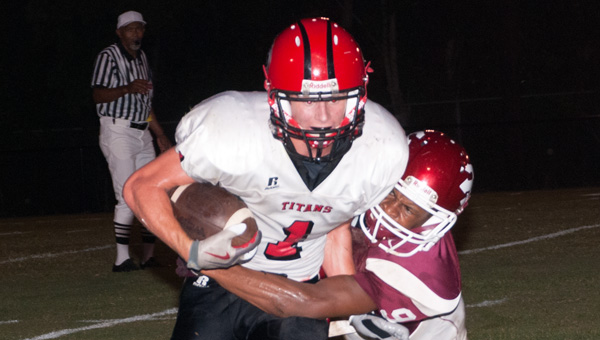 MAPLESVILLE – For the third week in a row, Maplesville’s starters enjoyed an early night, as the Red Devils on Friday defeated Class 1A, Region 4 opponent Holy Spirit, 49-0.

The No. 5 Devils (3-0, 2-0 region) built a 28-0 lead by halftime, allowing most of the regular players to spend most of the second half cheering on their teammates from the sideline.

MHS scored on its first possession with a 60-yard drive that was capped off by a 2-yard run by sophomore Brintain Hill.

Senior quarterback Matt Hamner added another score before the end of the first quarter when he faked a handoff and rolled left before cruising into the end zone.

Senior Hunter McCay scored on a 2-yard run with 6:28 remaining in the first half, and Hamner’s for a 2-point conversion made it 21-0.

Senior Edwin Pettiway took a shotgun snap from center before halftime and plowed his way up the middle for a score.

The opening kickoff of the second half went through McCay’s hands, but he more than made up for it as he raced back to his own goal line to scoop up the ball and then wove his way through Holy Spirit defenders to score.

Hill scored again in the third quarter, on a 5-yard run.

Freshman Damian Mitchell concluded the scoring when he took a sweep around right end for 23 yards on a 4th down and 2 play.

Panthers win but QB goes down

Jemison’s 42-16 win at Holt on Friday may prove costly. Quarterback Scott Clements went down with an injury early in... read more