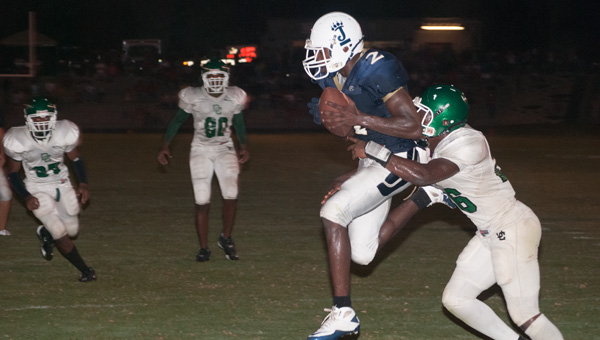 Jemison's Eddie Hubbard (2) catches a touchdown pass against Dallas County. Hubbard had 116 yards on seven catches in the game.

JEMISON – Jemison had a 21-0 lead Friday night before Dallas County picked up a first down, with less than 2 minutes to play in the first half.

The Panthers’ fast start, explosive offense and suffocating defense allowed them to take a 33-14 win on Homecoming despite five fumbles and nine penalties.

Still, coach Brad Abbott said the mistakes weren’t the result of a hangover from last week’s close loss to rival Chilton County in the season opener.

“We lost our focus in spurts,” Abbott said. “I thought we could have got maybe two more scores there before the half. But we had a good week of practice. I was pleased with the play of all the guys. It’s a region win.”

The positives from Friday far outweigh the negatives.

Jemison (1-1, 1-0 Class 4A, Region 4) scored on its first two possessions. Junior Javae Swindle, after running for a long touchdown the first play from scrimmage last week, took Jemison’s second play from scrimmage 64 yards for a score and a 6-0 lead.

Swindle scored on a screen pass from Clements with 3:33 left in the first half, and the point-after made it 21-0.

Unofficially, Clements completed 18 of 19 attempts for 239 yards and four touchdowns, including one to Satterfield in the fourth quarter.

That came after DCHS (1-1, 0-1) got on the board with a blocked punt returned for a touchdown.

Abbott said Jemison’s usual snapper in that situation was out of the game with an injury.
The Hornets got even closer on a 31-yard touchdown pass from Justin Moore to Keymiya Harrell about halfway through the fourth.