Crimsonettes have ties to county 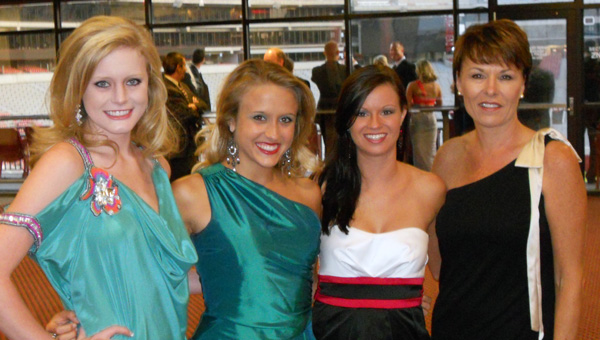 When the University of Alabama’s Crimsonettes take the field at Bryant-Denny Stadium on Saturday before the Crimson Tide’s first game of the season, there will be a strong Chilton County connection.

Two of the 26 members of the elite group of majorettes, sophomore Kristin Nelson and freshman Katie Hilyer, are Chilton County High School graduates—but are only the latest in a distinguished line of locals to wear the crimson uniforms.

“I cannot wait to be on that field; you have no idea,” Hilyer said before her first game performance.

Hilyer and Nelson, who used to joke about twirling together at UA but have seen the dream become reality, joined former Crimsonettes Karen Mitchell (1978-79) and Crystal Bass (2004-06) to give Chilton County a strong presence at a reunion on Aug. 21 at the stadium.
Three other locals have been Crimsonettes but didn’t make the reunion: Whitney Davis Whitfield (2002-04), Jennifer Carmicheal McGuirk (1997-2001) and Haley Davis Lively (1997-98).

Mitchell, School Improvement Specialist with the Chilton County Board of Education, is the link between all the others. She’s been teaching baton and dance since she was 12. Mitchell sponsored the CCHS majorettes for many years, until 2006, and still operates Alabama (the state, not the university, in case Auburn fans are interested) Baton and Dance—with the help of Bass. The two teach about 40 young girls who might one day become Crimsonettes themselves.

Mitchell on Saturday will be happy to see two former students on the same field she is familiar with.

“It’s so exciting because you know how excited they are,” Mitchell said.

Alabama Baton and Dance students have also gone on to twirl and dance at Auburn, Huntingdon, Montevallo and Troy in addition to UA.

The reunion featured a silent auction of autographed footballs, pictures and other memorabilia.

“We’re all very supportive of each other,” Bass said. “We’ve just kind of created our own support system.”

Whitfield recently moved to Charlotte, N.C., where, like her mother, she hopes to pass along her love of twirling and dance. She started a dance team at North Mecklenburg High School, and tryouts were attended by 74 girls.

“She decided she wanted to do in that community there what she did here,” Mitchell said.

Schools getting $1.5M from jobs bill

The Chilton County School System will receive about $1.5 million through the federal jobs bill recently passed by Congress. The... read more