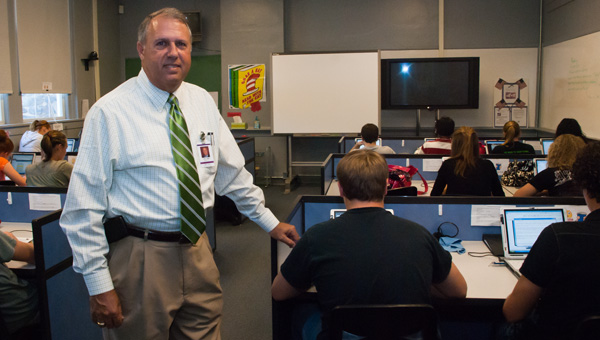 Firsthand experience: Larry Raines saw Verbena students benefit from an ACCESS lab and will soon work to make the most of the program in schools across the state.

Larry Raines figured he would retire as principal at Verbena, but an opportunity came along he couldn’t pass up.

Raines on Oct. 1 will begin working in the Technology Initiative department of the Alabama Department of Education. Specifically, Raines will take on a supervisory role with “Alabama Connecting Classrooms, Educators and Students Statewide,” a program Raines has experience with at Verbena.

“At this point in my career, something like this might not come along again,” said Raines, 59. “I’ve spent 37 years in K-12 schools as a teacher, coach and administrator. I was, and still am, completely happy here.

“This just all kind of fell into place, and it seemed like it was supposed to happen. I thought I would retire here, but then this came along and it was something I felt like I had to do.”

ACCESS was an initiative first mentioned by Gov. Bob Riley in his 2005 State of the State address. The program has since been implemented in every school in the state.

Verbena students are now in their fourth semester of using ACCESS, which allows videoconferencing and web-based learning opportunities. Verbena students, for example, can join an online videoconference and listen to instruction being given by a teacher at, say, Vestavia Hills.

Part of the reason Raines was interested in the new job is that he had seen firsthand what ACCESS can do for schools, particularly smaller schools like Verbena that have limited resources.
“I think it was designed for a school like Verbena,” Raines said. “Verbena students have greatly benefitted from the ACCESS program. Our students have taken courses they would have never been able to take.”

Raines informed the Chilton County Board of Education of his plans in August, before school started, and the Verbena principal worked with Superintendent Keith Moore on how long he would stay.

The position has been posted, and the board could hire a replacement for Raines before school reopens following the holiday break.

Before coming to Verbena, Raines served as headmaster of Autauga Academy for 11 years. He has also worked in McDonough, Ga.; Lowndes Academy; and South Montgomery County Academy.

Raines is a native of White City, a 1969 graduate of Billingsley and a 1973 graduate of the University of Alabama.

Raines said he will most remember “the staff, the people I work with every day” and “the kids, what a great group of kids they are.”

As for specific moments, Raines brings up his coaching the VHS basketball team in 1996, his first year at the school, to its only Chilton County Basketball Tournament championship.

“It amazed me how important that seemed to be for the school,” Raines said. “That made me a part of Verbena more than anything.”