Booth wins in return to Isabella 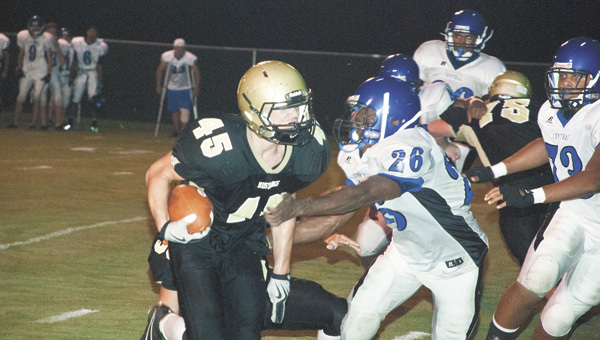 Isabella coach Scott Booth’s return to the Mustang resulted in triumph — and a Gatorade shower to boot.

Isabella played well on both sides of the ball, overcoming a few special teams mistakes.
The Mustangs first drive featured plenty of drama as the team recovered their own fumble, had a long touchdown run called back because of a penalty, converted a fourth down and caught the Cougars offside five times before Brandon Green found the end zone from five yards out, putting the home team up, 6-0.

Central-Coosa responded quickly though, a long pass from Jalan Thomas to Aaron Burns set up a 2-yard run touchdown run by Thomas. A successful PAT put the Cougars up, 7-6.

Isabella next turned the ball over on downs inside their opponents 10-yard-line, despite nice runs by Austin Haigler and Green.

The visitors scored next off a short run before halftime. The scoreboard wasn’t working during the game, meaning time was kept only on the field.

With less than one minute before the break, Haigler found Jordan Lenoir from 11 yards out to draw his team closer, 14-12.

The second half belong really the home team. The Cougars found themselves in many long distance situations, including and third and 41 on their first possession of the half.

Brandon Green scored his second touchdown of the night with a 45-yard-run to give Isabella the lead again, 19-14.

Green again found the end zone from 20 yards out to put the Mustangs up, 26-14.
Tyler Smith recovered a Cougar fumble that put an end to what was a good drive for Central-Coosa.

Green scored a fourth time with a four-yard touchdown run late in the game as Isabella went up, 32-14.

The Cougars then ran the kickoff back all the way in the final minute to cap scoring for the night at 32-21.

Isabella travels to Billingsley for their next matchup Friday.