Most Isabella football fans know that Friday will mark the official beginning of coach Scott Booth’s second stint at the school.

But the game will be a homecoming for Central-Coosa coach Ricky Cahalane, an all-state tailback at who graduated from IHS in 1974. 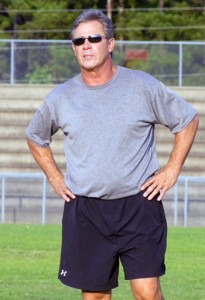 Coming back home: Central-Coosa coach Ricky Cahalane was a tailback at Isabella who graduated in 1974.

“It will be an interesting night, I guess,” said Cahalane, who will return to Bill Nabors Field for the first time since serving as an assistant coach in 1985. “It’s been a long time. For me, it’s the fact that I’ll be on the other sideline—I’ve never been over there before.”

Cahalane, in his second season at Coosa, is returning to Isabella with a team that features several offensive weapons.

The Cougars will take advantage of junior quarterback Jalan Thomas’ ability to make plays passing and running the football with plays designed to get Thomas out of the pocket.

“We’ve got to keep him contained, and that’s hard to do,” Booth said.

Thomas will throw to athletic receiver Aaron Burns and tight end Chartaveous Keith, who, at 6’3” and 240 pounds, is also a punishing blocker. Both Burns and Keith are seniors.

Isabella’s quarterback, senior Austin Haigler, will also be the focal point of his team’s offense.

Haigler was injured during the first possession of Isabella’s preseason game at Maplesville on Aug. 20, but Booth said he has practiced since the game and will play Friday.

Booth said conditioning could decide the outcome of the game because both teams have few players, so there aren’t many substitutes to come in and spell the starters.

“I think were in pretty good shape,” Booth said. “We’ve done enough running for anybody to be in shape.

We have got to be mentally tough. Sometimes, you’re physically ready to play, but your mind says, ‘It’s hot, I don’t want to be playing.’”

The Isabella coach said the community has been supportive of his return. Booth said it feels like “coming back home” and that he is again around his “second family.”

Cahalane, in his second year at Coosa, will have to forgive the home fans if his return isn’t as hospitable. It’s just that he will be on the wrong sideline.

But Cahalane will have fond memories of Isabella no matter how the game turns out.

“The thing I remember about Isabella is that coach (Harold) Gilliland, coach (Frank) Daniel, coach (Thomas) Swanner and coach (Elem) Hill—those men coached from junior high all the way through high school. In the five years I was there, I never heard one word of profanity come from those men’s mouths, and I’ve taken that approach,” Cahalane said. “And the other thing is, we knew they cared about us, whether we played or not, we knew they cared about us as people.

“Those are the things that have stuck with me from those men. They’re the reason I’m in this business.”

Central-Coosa suffered through a winless season in 2009 as then first-year coach Ricky Cahalane “cleaned house” and established a direction for the program, he said. The first year on a new job is always difficult, and Cahalane—unlike Isabella coach Scott Booth—will benefit from having the transition behind him. Pick: Central-Coosa

No. 5 Maplesville at Vincent
A stiff test in the opener could pay dividends for Maplesville later in the season. Pick: Maplesville

Verbena shut out in jamboree

The Verbena football team fell to Talladega High School, 14-0, on Aug. 21. The Verbena squad of only 19 players... read more