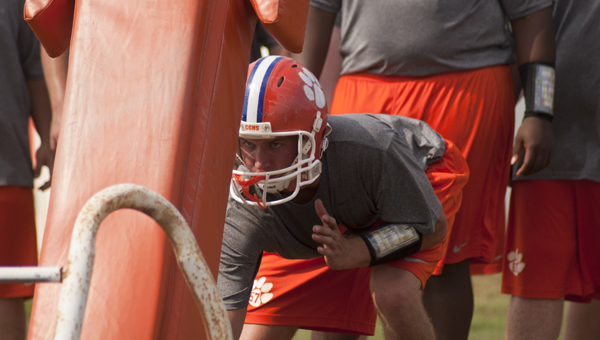 Ready to go: Chilton County senior Heath Bennett prepares to block a sled during practice this summer. Bennett and CCHS open their season at 7 p.m. Thursday when they host rival Jemison.

Coaches Brad Abbott and Brian Carter, good luck convincing your players Thursday night’s game is just one of 10 on the schedule.

But downplaying the game beforehand is useless because everyone knows what’s at stake: bragging rights.

“The kids think about this game all summer during workouts,” said Abbott, the Jemison coach.

That’s the result of the county’s two largest schools—and two fiercest rivals—opening the season against each other (on a Thursday, no less, to ensure the entire county is focused on the game).

So many fans are expected to fill Tiger Stadium that tickets have been pre-sold at both schools in an effort to cut down on long lines at the ticket booths.

Coaches differ on their opinions of the best way to handle the hype, and these strategies can change from year to year.

“We’ve basically just kind of approached it as business as usual,” said Carter, the CCHS coach. “We don’t look at any game being bigger than any other game.”

But players that have played in the game before, like much of Jemison’s experienced roster, don’t need a different coaching style to tell them this game is different.

“We have a mature team, so our kids are jacked up and we hope to keep it that way,” Abbott said.

Which team best handles the emotion surrounding the game could come out on top. Nerves or over-exuberance can cause mistakes like turnovers and special teams gaffes.

Abbott and Carter agreed that home field advantage might be overstated because of the schools’ proximity.

“Both teams are going to have so many fans that it feels like a home game to either team,” Carter said.

Also consider that the road team has won the last three games in the series.

One thing is for sure: Fans can expect to see both teams’ best effort. Neither Abbott or Carter had injuries to report, and Carter summarized why.

“They’re not going to miss this one,” he said.

Who will win?
Both Chilton County and Jemison feature speedy backs, experienced linebackers and strong offensive and defensive fronts. The only apparent difference between the two teams is at quarterback, where Jemison is leaning on a third-year starter while CCHS is breaking in two new talents. In a tight defensive struggle, the experience under center (or in the shotgun) will be the difference. Pick: Jemison

Tickets are being sold early for the Chilton County-Jemison football game at 7 p.m. Thursday at Tiger Stadium. Fans can... read more