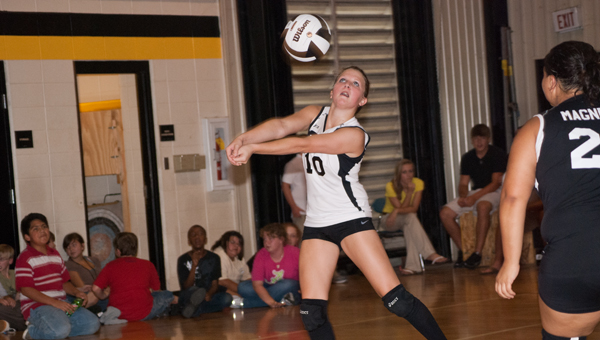 Allison Mims and her Isabella teammates defeated Thorsby on Tuesday to improve to 4-2 on the season.

The match at Isabella was played during the school day and so was watched by many fans not normally in attendance.

Isabella players were also given unique opportunities to participate. Coach Glen Graham played all 14 of his Mustangs in two of the three sets in the match.

“We will do that early in the season, if we can,” Graham said. “I told them they need to be ready if I put them in so they don’t have to spend all season being cheerleaders over here.”

The younger and less experienced Mustangs played well, but some mistakes almost resulted in Thorsby (5-4) taking the third set. The visiting Rebels jumped out to a 3-1 lead and were down only 9-7 before Isabella (4-2) took control.

The first two sets weren’t close. Thorsby won the first point of the match before the hosts responded with six consecutive points, and Isabella closed out the second set with an 11-0 run.

Senior Amber Wyatt provided the exclamation points for both runs with powerful hits from well above the top of the net. Wyatt finished with 10 kills.

Kaylynn Culp finished with 13 aces, and Jessica Maciel had 13 assists.

Wyatt had 14 kills in that match to go along with Maciel’s 16 assists, four aces and four digs.

Over the top: Chilton County’s Rachel Johnston, right, tips the volleyball over two defenders during a match Monday at Thorsby.... read more