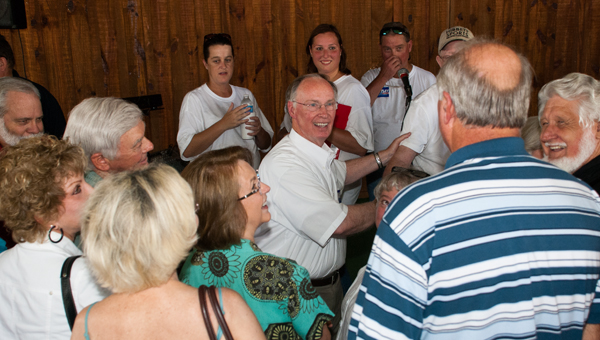 Robert Bentley laid out his platform Saturday in a rally attended by local residents and both local and state political candidates.

Bentley began his speech by declaring his faithfulness to the Republican Party (“I first voted for Barry Goldwater in 1964,” he said) but insisting he was not the choice of the party’s top officials.

The No. 1 issue facing the state, Bentley said, is unemployment. The Republican nominee, who will face Commissioner of Agriculture and Industries Ron Sparks in the November general election, said the state’s approach should not be to create government jobs but instead to remove regulations so businesses can grow.

“We have an intrusion of the federal government into our lives,” Bentley said to cheers from those in attendance. “And make no mistake, this guy I’m running against in a left-wing liberal.”

To demonstrate the differences between he and Sparks, Bentley brought up the candidates’ stances on abortion, illegal immigration and health care.

Bentley’s views were consistent with the Republican Party line. He said he would be a governor that would be “proud to stand with Gov. Brewer of Arizona (on prosecuting illegal immigrants)” and said President Obama’s health care bill is “one of the worst things that’s ever happened to this country.”

Wallace stressed the importance of electing representatives and senators that would help Bentley carry out his agenda.

Though Bentley appears to hold a lead over Sparks among likely voters, Bentley stressed the need for his supporters to continue working hard for the party.