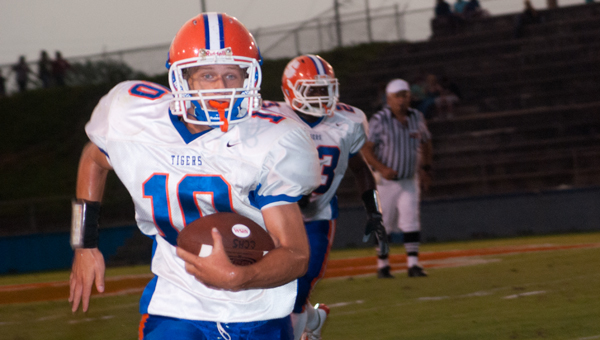 By Ace Futrell | The Clanton Advertiser

The Chilton County Tigers had no trouble putting the Billingsley Bears away, 19-0, Thursday during a preseason game in Clanton.

The Tigers were bolstered by a strong running game and a tenacious defense that kept the Bears at bay.

“Everyone showed a great effort,” Chilton head coach Brian Carter said. “It’s what we look for, and it’s what we’re going to need to win.”

Nettles made his first appearance at Tiger Stadium since coaching the Tigers from 1993-1996.

“We’ve got a chance this season, but we’ve got to get in better shape,” Nettles said. “And I have no doubt we can do that.”

Chilton County earned its first two touchdowns in the second quarter on a drive from sophomore Cameron Cummings, who got the Tigers to the one-yard line before running in for six the next play.

The second score came soon after, when sophomore Michael Seaton rushed nearly 50 yards to put his team up by 13.

Both teams battled defensively, turning the ball over several times, but the Tigers pulled away, scoring their final touchdown with 9 seconds to go in the third quarter.

Senior Chris Fielder rushed for two yards to score and end the night’s scoring for both teams.

“We need to fine-tune the execution all around, on offense and defense,” Carter said.

Chilton County opens its regular season Aug. 26 against Jemison, and Billingsley will open its season Aug. 27 against Dallas County.