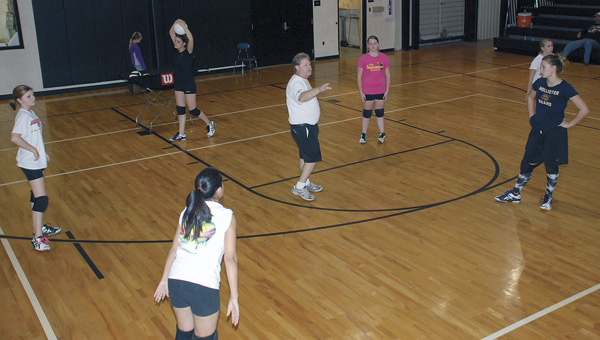 Volleyball coach Glen Graham is eyeing a historic win Thursday in Isabella’s first match of the season, but more important to Graham and the team is the end of the season.

Isabella reached the Elite Eight state tournament last year, but an opening round loss to Sand Rock left the Mustangs eager to return and prove themselves against the state’s best Class 1A competition.

“The team chemistry has been really good so far this year,” Graham said. “It depends on the senior leadership, I think. This year’s senior class, they were disappointed in how the season ended, and they’ve committed to not let that happen again.”

The team had T-shirts made up that included the slogan “Unfinished Business.” With a proven core returning and several younger players that have impressed in practice, the Mustangs might be able to finish this season.

That quest will begin at 5 p.m. Thursday, when Isabella hosts Maplesville and Marbury in a tri-match, but not all has gone as planned so far.

“She’s a senior, she’s played six years and she was a captain this year, so we miss her presence on the court,” Graham said.

Maciel was supposed to return to practice Tuesday, but Graham said sophomore Heather Posey has filled in admirably.

Mason and Wyatt were chosen by teammates as co-captains.

Davenport could start as an outside hitter, and Magnus will be a defensive specialist. Both players have been involved with the program in the past but didn’t play last year.

Craig is a talent Graham has targeted for several years. She finally decided to give the sport a try and has been a revelation.

Griffith played with the junior high team last year, and Graham said she will help out at middle blocker.

“It’s a big jump (from junior high to varsity), but she’s a good athlete and a smart kid,” Graham said. “We can live with some mistakes. We’re just waiting for when her experience matches her athleticism.”

Most of Maplesville’s volleyball players have never played the sport before. Just as significant, though, is that they’ve never played... read more