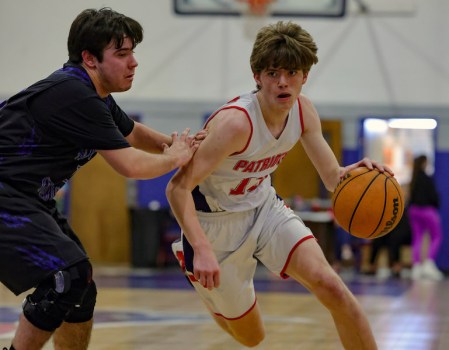 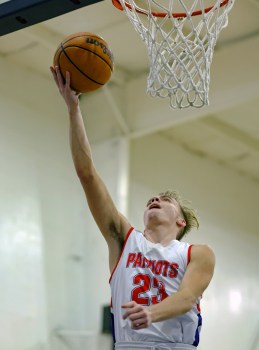 Mason McCary puts up a layup for the Patriots in their 61-50 win over New Life Christian Academy on Jan. 19. (BRANDON SUMRALL | SPECIAL) 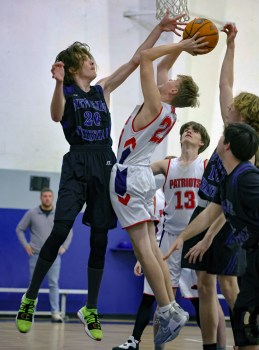 The Chilton Christian Academy varsity boy’s basketball team is hitting its stride after capturing two wins on Jan. 19 and 20. The Patriots outlasted New Life Christian Academy 61-50 on Jan. 19 at home. Cayman Hamilton led all scorers with 38 points and added eight rebounds and three assists. Cayman Hamilton, a freshman, knocked down five 3-pointers in the game and outdueled New Life’s senior Branson Durden who had 28 points in the game.

CCA was down two starters against New Life on Jan. 19.

“We needed some people to step up and contribute,” CCA coach Shanon Hamilton said.

Mason McCary posted a double-double with 14 points and 18 rebounds and added four steals. T.J. Lyon had seven points for CCA. The win clinched the Patriots the season series with New Life Christian Academy going 2-0 and pairing the Jan. 19 win with a 60-48 win on Jan. 5 on the road.

“We are starting to get contributions from people who did not contribute much early in the season, but now they are feeling more comfortable in the system,” Shanon Hamilton said. “That is important when you are getting ready for playoff basketball and trying to reach your potential as the season closes instead of peaking early.”

CCA followed up its Jan. 19 win with a 57-49 triumph over Eastwood Christian School on the road on Jan. 20. Cayman Hamilton led all scorers with 28 points and went a perfect 4-for-4 from beyond the 3-point arc. The freshman added 10 rebounds and four blocks to his game totals. Connor Bice had a double-double with 10 points and 13 rebounds, and Donovin Norcross had 10 points, four steals, three rebounds and three assists.

“The last 10 games we have really pulled together as a team,” Shanon Hamilton said. “We are on a really good streak right now, and we are starting to peak at the right time towards the end of the regular season.”

The Patriots are now 12-9 overall this season and have won three-straight games. CCA has won eight of their last 10 games dating back to Dec. 15. With only four regular season games left, and all being ACCA Division 2A matchups, CCA still has a chance at the two seed going into the state playoffs if they can win their last four games. Getting the two seed would give the Patriots a first-round bye in the state playoffs.

Shanon Hamilton said he wants to see more defensive intensity from his team over the course of the last four regular season games.