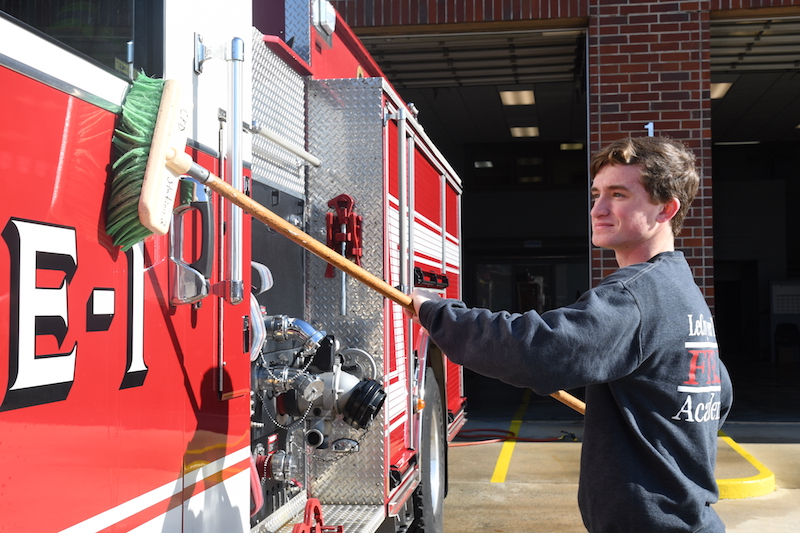 LeCroy Career Technical Center has partnered with the Clanton Fire Department to give one student hands-on experience in his chosen field.

Joshua Minor of Chilton County High School completed all of the volunteer firefighter certification requirements as a junior with Landon Lowery at LCTC.

Minor said he was interested in a career as a firefighter because “my dad has always volunteered, and I have always thought it would be fun to do something that was an adrenaline rush, something besides sitting behind a desk.”

Knowing that being a firefighter was what Minor wants as a future career, Lowery set out to find an opportunity for the honors student to increase his skillset in his senior year. Lowery and Clanton Fire Chief Davis Driver discussed the possibility of Minor doing an internship with the department. Driver liked the idea and later presented it to city leadership.

“The mayor and council were 100% on board with it,” Driver said.

Minor began his internship in August and will continue until the end of the school year.

“I just thought it would be cool to see how an actual department worked, what they do here,” Minor said.

The internship gives him a better sense of what an actual day on the job would be like and hands-on practice he could not get through the simulated scenarios in the LCTC program.

This goes beyond just keeping the firetrucks clean, but includes on-the-scene help on some fire and medical calls a couple of hours each day. Driver emphasized that Minor would be staying outside of any structure fires that were responded to.

“I have been able to experience different kinds of emergency calls between wrecks and medical calls,” Minor said. “I have learned how medical supplies work and how they use them on an ambulance.”

“He is interacting with a real patient that can talk back,” Lowery said.

Minor said he has enjoyed the opportunity to give back to the community. He has also met a lot of new people through the internship.

Minor continued coming to the station even during part of the Christmas break.

“That speaks a lot about him and about his character,” Driver said.

Lowery said the internship has gone well, and expressed his appreciation for CCHS administration for being understanding if Minor is not back to the school when he is scheduled to be because he is out on a call.

While it is not an opportunity that would be a good fit for every student, Driver said the department would like to continue offering internships in future years.

“In the future, we will be hiring more firefighters and some of them that come up here to do the intern stuff could very well be one of the people we hire because we see them, see that they have a good work ethic,” Driver said.

Lowery said internship opportunities through LCTC are open to students the school feels would do well and be able to keep up with other course work.

“(Minor) did a lot of work in his younger years to make it to where his senior year he could do something like this,” Lowery said. “It takes a very driven individual to be able to do that.”