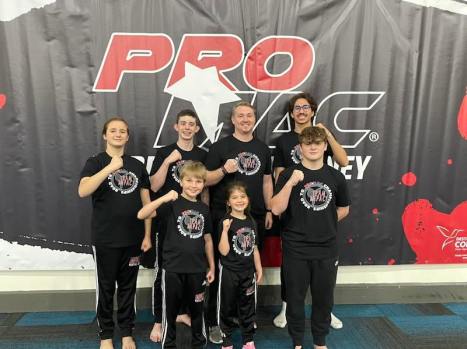 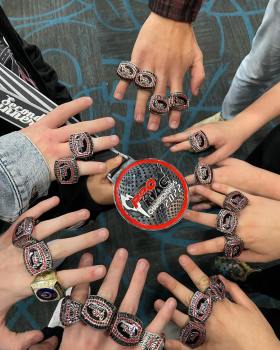 The rings awarded to Team Impact competitors for winning their respective championships over the course of the 2022 competition season. (SEAN GILHAM | CONTRIBUTED)

“To see what they did and compete, after all the hard work they have put in, it is very fulfilling for a coach,” Sean Gilham, instructor at Impact Martial Arts, said. “I am proud of them for doing as much as they did.”

PROMAC is the end of year championships where the top competitors from each region come together to crown the top competitors in their individual level and age divisions. The Heartland Region Division consists of teams from Arkansas, Missouri and Alabama. The Southern Region Division is made up by teams from Texas, Tennessee, Florida, Georgia and Alabama.

Gilham said the team consistently competed against teams from states where mixed martial arts are more well-known and practiced, and he was impressed with how his students did.

“It is awesome to see what a small town in Clanton can do compared to teams from Memphis or Destin,” Gilham said. “It is neat to see a small little team like us do what we were able to do.”

Impact Martial Arts begins its competitive season each year in January, and they run through November. All six competitors are expected back next year, but Gilham said he is hoping to grow the team over the winter and through the beginning of next season. Gilham hopes to grow not only the team, but the sponsors behind them as well. The sponsors that helped send the six competitors to Destin were the YMCA of Chilton County, Brass Express LLC, Keystone Life and Annuity LLC, Prattville Automotive Group and Just An Expression.

“I am more of a process person, and everyone stuck with our process in training and put the hours in and outside of the gym,” Gilham said. “They believed in each other as a team, and even though it is an individual sport, they still had each other to back one another up and motivate themselves.”

Impact will be hosting its own tournaments in Montgomery in April of next year.

Anyone interest in participating with Impact can find all the information on their website www.clantonmartialarts.com. Impact is located inside the YMCA of Chilton County. The program is year-round, so people can sign up and begin training at any time.