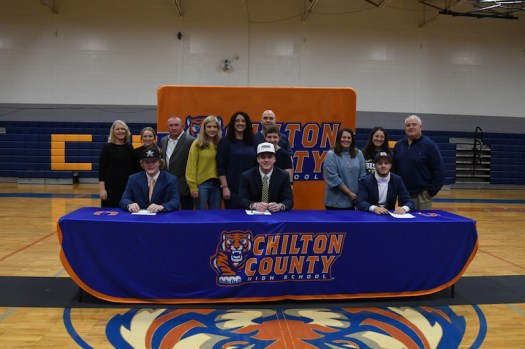 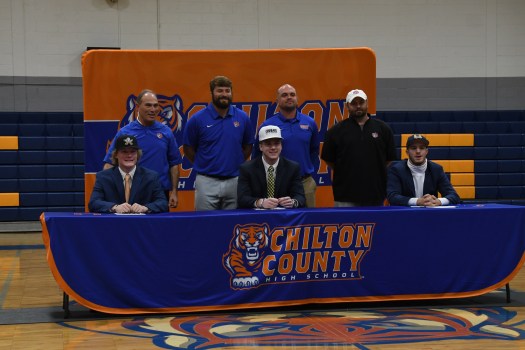 All three seniors signed their letters in front of friends, family and the CCHS baseball coaching staff.

“I am very proud of the guys, and I know for those three young men it has probably been a dream since childhood to play college baseball,” CCHS coach Ryan Ellison said. “To see them be able to have that experience together and fulfill a dream to play at the next level, it was just a proud moment for me and our baseball program.”

Bee posted a .370 batting average with 19 RBIs, six doubles and a home run in a shortened 2022 season after battling injury throughout much of the season. Ellison said he is hopeful they can keep Bee healthy throughout his senior year in 2023, and expect his pitching to set himself apart at the college level.

Bee said Lawson State was one of the first programs that reached out to him during his recruitment process. Bee said the Lawson State coaching staff plan on using him as a two-way player to start on the pitching mound and in the batter’s box to see where he best fits.

“I went on my visit and the coaching staff just made me feel at home,” Bee said. “I just want to go out there and do the best I can and hopefully, contribute to the program from both the pitching and hitting standpoints.”

Fulmer, who Ellison plans to move from third base to shortstop in 2023, boasted the highest batting average in Chilton County in 2022. He added 31 RBIs, seven doubles, three home runs and two triples to his totals last season. Fulmer said the move “puts him in a more natural position” on the baseball field.

Fulmer’s plan is to play two seasons of baseball at a junior college, or JUCO, and then transfer to a division I school to finish his college years, and Chattahoochee Valley fit that plan.

“I really liked Chat Valley and how their program is, and I really wanted to go to a JUCO,” Fulmer said. “I want to get to the next level and get to (division I), and I think JUCO would be the best thing to do to get experience.”

Ellison described Fulmer as “an extremely hard worker” during his time at CCHS.

“He is going to give his best day in and day out,” Ellison said. “I think he is going to carry those characteristics to the next level, and be successful because of that.”

Fulmer said he plans on being a leader for the Tigers this upcoming season, work on his defensive skills extensively and “hopefully bring the bat again.”

Miller has been the Tigers everyday catcher for the past two seasons and said being able to catch some of the arms CCHS has had during his high school career has prepared him for college level pitching. Miller said his catching abilities are his best attribute and plans to catch at Southern Union as well.

“Cannon is a very tough guy having to play back there behind the plate, and he gets beat up sometimes but he just keeps going and going,” Ellison said. “He is more of a vocal leader for us, and I think that those qualities will definitely help him at the next level.”

Miller slashed for a .398 batting average last season with 22 RBIs, eight doubles and one home run, which was good enough for Southern Union to come calling for his services.

“I walked onto campus and I knew it was special, and their facilities are some of the best junior college facilities in the country,” Miller said. “It is a special place when you go and see it for yourself.”

All three seniors said they are looking forward to continuing to build the team chemistry and “just playing with the guys one more time.”

“You always need guys who possess good leadership qualities and high character in your program … and they have done a good job at carrying those qualities out and being a good example for our younger guys,” Ellison said. “They have played huge roles for us throughout their high school baseball career, and without some of their leadership and work ethics, we may not have had some of the success that we have had.”

The three seniors will be looking to improve upon Chilton County’s 11-15 record last year after making an appearance in the quarterfinals of the AHSAA Class 6A state playoffs in 2021.