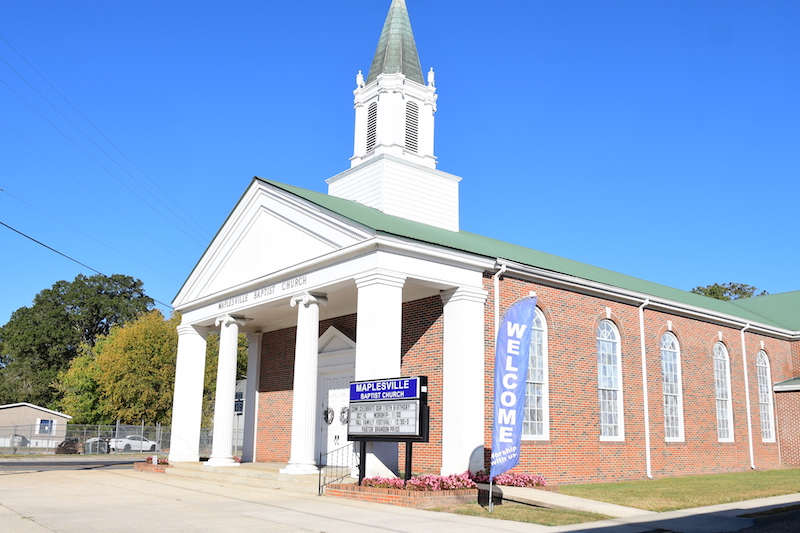 Editor’s Note: This article originally published in Generations 2022. Copies are available at The Clanton Advertiser office.

Maplesville Baptist Church has been at the heart of Maplesville’s main street since 1908.

The church was organized in 1907, and was able to construct a building the following year.

According to “Maplesville: the Town and its People,” the wooden church building was completed for $3,600 and was 55 square feet.

The first pastor, John W. Mitchell, was not named until 1910.

Maplesville resident Clem Clapp has attended the church for the majority of his life and collected some of its history.

The bell in the Maplesville Baptist tower has a history of its own. Its story is included in “Maplesville: the Town and its People” as well as “Historic Alabama Bells” By Thomas Kaufmann.

The bell is about 50 years older than the church building. Local businessman T. U. Crumpton found the bell for sale in Selma. It is believed that the bell was likely purchased from a salvage dealer. The bell had been used in a Methodist Church in old Cahaba, back when the town was the capital of the state. When the bell was installed in the tower of the Maplesville church some parts had to be added, such as the rocker, Clapp said.

He confirmed that the bell is still in place at the church.

The current church building was completed in 1960. The education building had been dedicated around 1954, Clapp said.

In 1949, the church was able to make the pastor’s salary full-time. The first full-time pastor was Clayton Gilbert.

Prior to that, all of the pastors had been bivocational.

“He was a good salt of the earth Baptist, and he told you what he thought it was and that’s the way it was,” Clapp said.

Atcheson also owned a hardware store in Maplesville before moving to Clanton.

Today, Brandon Price from Thorsby is the pastor. The church has made the position full-time again after being part-time for a while. The style of the services at the church “are a little more contemporary” with Price, Clapp said.

Community outreach is important to the church. A food ministry is held one Saturday each month. The Awana program for children on Wednesday has grown to 60-70 children. The majority of these children attend Maplesville High School just up the road.

“It got our church moving a little bit again, and we are proud of that,” Clapp said.

Some of the children may attend another church on Sunday, but some were not attending church prior to being a part of Awana, Clapp said.

The church is also in charge of the historic cemetery in Maplesville across from Maplesville Pharmacy. The cemetery had initially been started by the Methodist church in town.

“In 1972, I think the Methodist membership was down a good bit, and so the Baptists took over and amended their constitution to have a perpetual care cemetery out there.”

More recently, efforts have been made to restore the cemetery.